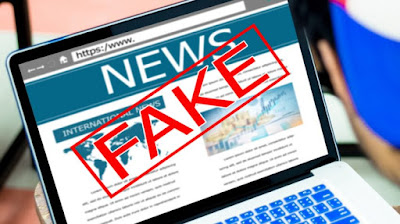 Writing in Pacific Standard, an online magazine, Jared Keller issues a warning about "fake news." He calls it a "social virus, an epistemic pandemic rotting the central nervous system of American public life."

Forget ideals of freedom or liberty or individual sovereignty or self-determination, the superstructures of modernity and the watchwords of our daily political skirmishes. Trust—fundamental, implicit trust—has been at the center of every society since the dawn of man. You know what happens when the center does not hold.

That sounds really bad, that "epistemic pandemic rotting the central nervous system of American public life." As I get it, Keller thinks that our politics cannot function well when our trust falters about what we read in the newspaper, or about what we see online - and a lot of us don't trust the news sources we read and rely upon:

A new Monmouth University poll published on Monday indicates that a whopping 77 percent of Americans believe that major broadcast and print outlets report fake news "at least occasionally," up from 63 percent in 2017. But fake news doesn't mean hoaxes or lies: While 25 percent of Americans said the term applies to stories that are factually wrong, a majority of respondents (65 percent) said fake news also involved "how news outlets make editorial decisions about what they choose to report," according to Monmouth.

If members of the public are losing trust in news sources because they believe that news outlets "make editorial decisions about what they choose to report," then we need to reeducate ourselves about how public debate and discussion always and inevitably proceeds.

It is absolutely and of course true that news outlets "make editorial decisions about what they choose to report." That goes with the territory! The fact that editorial decisions are made, with news sources reporting on some things and not on others, does not make their reports "fake news." If people think the news is "fake" because it is reported from a particular "slant," or from a perspective that reflects the political biases of the organization that reports it, then people need to rethink. Does the news we get come to us based on "editorial decisions?" Well, yes! Welcome to reality!

We should expect that the news we get will come from different and conflicting perspectives, and we should welcome the differences, not reject them. If we call it "fake news" when we get a news report from a perspective with which we disagree, then we are asking for autocracy, not democracy.

Democracy depends on differences. Those differences are real, not "fake." We need to hear everyone's reports, and then use the institutions of our political life to make some choices.

When we do choose, sometimes we're right.