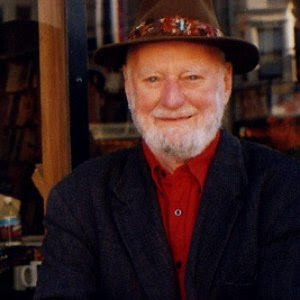 Pictured is Lawrence Ferlinghetti. He has just turned ninety-nine! To honor the occasion, the San Francisco Chronicle ran a lovely story about Ferlinghetti, including a rather extensive interview titled, "A life in full." Depending on the nature of your relationship to the Chronicle's paywall, you might even be able to read the article by clicking the link I have just provided.

Among other things, Ferlinghetti told the Chronicle what he thought about our current president. The Chronicle also cited what the newspaper called Ferlinghetti's "last poem," addressing that same topic.

I am personally hoping that the Chronicle's characterization actually translates to Ferlinghetti's "most recent" poem. At any rate, here is what one wise man is telling us, in poetry and prose:

Q. What’s the last poem you wrote?
A: It was published in the Nation magazine. It’s called “Trump’s Trojan Horse”:

“Homer didn’t live long enough/ To tell of Trump’s Trojan Horse/ From which all the president’s men/ Burst out in the White House to destroy democracy/ And institute absolute rule by corporations/ Bow down, oh Common Man/ Bow down!”

When speaking about President Trump, [Ferlinghetti] is unequivocal: “Trump is an evil man,” he says. “He’s so dangerous. I think you’ve got to take this man seriously. I think he’s out to destroy democracy.”

William A. Galston, who was writing in The Wall Street Journal on the same day that the Chronicle's article on Ferlinghetti appeared (March 21, 2018), also commented on the "dangerous" qualities of our current president:

As rumors swirled over the weekend that the White House would soon undermine and eventually remove special counsel Robert Mueller, Sen. Lindsey Graham predicted on CNN that doing so would be the beginning of the end for the Trump presidency. “We’re a rule-of-law nation,” he declared.

We had better hope Mr. Graham is right. The rule of law is what protects citizens from a government driven by the passions and prejudices of its leaders. Some laws are better than others, of course. But the basic structure of law—a system of rules applied fairly to all—is the best way to restrain the worst threats to liberty.

It is often said that the Founders established a government of laws and not of men. The truth, however, is more complicated, since laws cannot interpret or enforce themselves. Judges, juries, prosecutors and government agencies (among others) all participate in turning written words into institutional practices. Possibilities for error exist at each step. So do opportunities to turn law into an instrument of self-interest or partisan advantage.

Galston is right. The laws and our constitutional protections are not "self-executing." If Trump pops out of the Trojan Horse, it's going to be up to us!