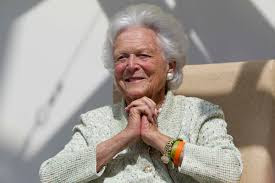 Barbara Bush died. Many positive things were immediately said about her. In Fresno, California, however, an English professor at Fresno State University was much less positive.

Randa Jarrar wrote on Twitter that Barbara Bush was a "generous and smart and amazing racist who, along with her husband, raised a war criminal."

This comment was, of course, not very nice. On the other hand, Barbara Bush's son, President George W. Bush, did employ false information to justify and carry out a war in Iraq in which thousands of Americans and over 100,000 Iraqis were killed.

Bush also employed torture against Islamic men whom he asserted were "terrorists." The infamous Abu Ghraib torture facility was one of the facilities utilized by the Bush Administration, with torture both carried out and justified. Many alleged terrorists were never brought to trial, and no evidence was ever made public demonstrating that the allegations against them were true. Some of these alleged terrorists are still incarcerated in a United States prison in Guantanamo, Cuba.

There is, in other words, what I think is a "fair argument" that George W. Bush could properly be called a "war criminal."

I am not sure exactly what Barbara Bush might have done to justify the "racist" label. However, it does seem to me that it is not outlandish that someone might claim that the former First Lady was racist. In fact, racism is pervasive, and appears almost everywhere in our society, and in almost all white people, to some degree, even in people who want to, and strive to, extirpate its traces.

"Disrespectful" I will grant. But "beyond free speech?" What is that "amazing" College President talking about?

In my opinion, Dr. Castro needs to take a brush up course in Constitutional Law. I happen to know that there is an excellent course available at UCSC. Maybe Dr. Castro should take a leave of absence from Fresno State, and enroll in the course that is offered here.

Maybe, if he paid attention in class, Dr. Castro might even be able to pass the course. He sure couldn't pass it now!