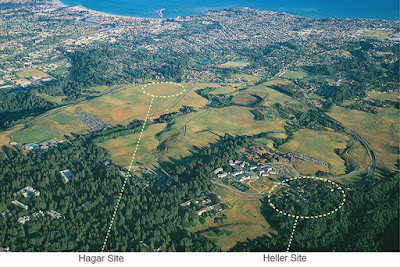 I live in Santa Cruz, California, which boasts, among other things, a University of California campus. The Santa Cruz campus is popularly known as UCSC, and is pictured above. It is quite beautiful.

The University has announced plans to add 10,000 students to the local campus. Given the fact that the community is already facing extremely congested traffic conditions, a massive affordable housing crisis, and very significant water security issues, this announcement has not met with a favorable response from almost anyone. Nonetheless, the announcement has been issued by the University, following the D.A.D. principle explained in yesterday's blog posting. The first two steps have already been taken: "D" (decide), and "A" (announce). The University is now in "D" (defend) mode. Official University spokespeople say there is simply no choice!

Of course, in all human affairs, there is always a choice. But choosing something different from what the University has announced would require the University to change its plans. What a horror even to contemplate  that!

In related news, the University has made another announcement, too, once again employing that tried and true D.A.D. formula:

UC Santa Cruz is undertaking a major housing initiative. The Student Housing West project is part of President Napolitano’s system-wide initiative to build 14,000 beds across the UC by 2020. The UCSC initiative was announced in December 2016.

The new housing development builds upon prior studies and demand analyses conducted in 2014 and 2015. Units will be built for upper division undergraduates, graduate students, and students with families. The project will deliver 3,000 beds to campus by 2022.

Not mentioned in this announcement is the fact that the proposal would require the current campus Long Range Development Plan to be amended, since the current plan puts a premium on the preservation of the beauty of the campus' natural lands. The beautiful meadows shown in the photo above are considered sacred by present and past students. Those 10,000 proposed future students, presumably, wouldn't realize that something had been lost if the meadows were filled in with a rather undistinguished, condominium-type housing development.

People interested in commenting on the Draft Environmental Impact Report for the "Student Housing West" proposal, as it is officially denominated, have until May 11, 2018 to get their comments in. The two-volume, 1,100-page Draft EIR can be located by clicking this link.

I am thinking that I might comment, and here is one comment that immediately comes to mind, reading the announcement issued by the University, which is partially quoted above.

If the University President is proposing to build 14,000 beds in the entire UC system, and UCSC is going to furnish 3,000 of those beds, then the President of the University is suggesting that the UCSC campus provide 21% of the new beds.

Well, is there something wrong with that? I think maybe there is!

The UCSC campus has an approximate enrollment of 19,000 students at the current time. The entire UC system has approximately 273,000 students. In other words, UCSC accounts for approximately 7% of total student enrollment, but the President of the University is proposing to put 21% of the new housing at UCSC.

It sounds to me like the University needs to start considering alternatives that will relocate that proposed new housing proportionate to the actual student census, which would mean that it should be spread around ALL of the various UC campuses, proportionately, instead of trying to force UCSC to pick up a disproportionately large share of new housing and student growth.

Oh, but that would mean the University would have to change its plans!