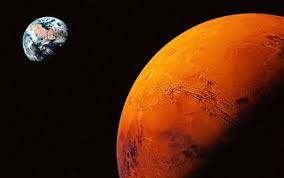 That's the planet Mars in the foreground. You recognize the planet in the background, too, of course!

This picture is taken from a 2015 news article reporting on a statement by NASA that "humans will be living and working on Mars in colonies entirely independent of Earth by the 2030s." The referenced article ran in the British newspaper The Telegraph, and I am happy to say that not everyone in Britain applauded. George Monbiot, for instance, who writes a weekly column for The Guardian, has some very critical things to say about this idea:

Seldom does a week go by without someone writing to me to explain that when we have squandered this planet's capacity to support us, we can abandon it and move to another one. Earth itself should be treated like a plastic cup or a paper towel: to be thrown away when it is of no further use. (Or, to be more precise, we should throw ourselves away - into space. Perhaps it would be more accurate to say that we see ourselves as disposable.) This belief is the ultimate negation of belonging.

People who would consider the idea of living in the Gobi Desert intolerable - where, a realtor (estate agent) might point out, there is oxygen, radiation-screening, atmospheric pressure and one g of gravity - rhapsodize about living on Mars. People who blithely envisage the collapse of our biosphere imagine that we will escape the power, greed, and oppression that could cause it by relocating into orbiting pressure vessels controlled by technicians, in which we would be trapped like tadpoles in a jam jar. The enthusiasm for planetary abandonment is not restricted to a far-out fringe: NASA has published papers presenting it as a thrilling prospect. This is how far the detachment from physical reality has advanced. This is what is delivered by a system that insists we are subject to no resource constraints.


A friend dropped me off a copy of Monbiot's book, the cover of which is shown below. Monbiot's views on moving to Mars are only one of a great many excellent insights. This is one good book: 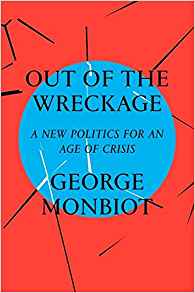