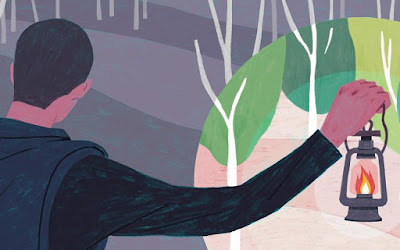 Eric Holthaus, a meteorologist and a journalist based in Minnesota, wrote an affecting column in the March / April 2018, edition of Sierra, which is the national magazine of the Sierra Club. Holthaus' article was titled, "Climate Change Blues." He began with the following personal statement:

I lose sleep over climate change almost every single night. I can't remember how long this has been happening, but it's been quite a while, and it's only getting worse. I confess: I need help.


Holthaus' suggestion that he needed therapy to deal with the anguish he was feeling about global warming reminded me of one of Bob Dylan's songs, "Talkin’ World War III Blues." Of course, that song was  focused on fears about nuclear war, instead of fears about climate change:

Some time ago a crazy dream came to me
I dreamt I was walkin’ into World War Three
I went to the doctor the very next day
To see what kinda words he could say
He said it was a bad dream
I wouldn’t worry ’bout it none, though
They were my own dreams and they’re only in my head

I said, “Hold it, Doc, a World War passed through my brain”
He said, “Nurse, get your pad, this boy’s insane”
He grabbed my arm, I said, “Ouch!”
As I landed on the psychiatric couch
He said, “Tell me about it”

If you know the song, you will remember how Dylan's psychiatric session was ultimately resolved, after Dylan spotlights the kind of isolation and loneliness that he is feeling:

Well, the doctor interrupted me just about then
Sayin’, “Hey I’ve been havin’ the same old dreams
But mine was a little different you see
I dreamt that the only person left after the war was me
I didn’t see you around”

Holthaus is talking about real episodes of depression, and he is not the only one. He is not the only one who can't sleep, or think, or function well in the face of the real possibility that our world will be ending soon, as we ignore global warming and push human civilization into collapse.

In the brief article in Sierra, Holthaus lets us know that he has, in fact, sought therapy, and with results not unlike those that Dylan sings about:

About a year ago, I went to see a counselor for anxiety. He seemed unprepared for my emotional crisis. His simple advice was, "Do what you can." Easier said than done, of course, but the advice helped me to realize something important: We are all in this together.


Let me highlight that!


We are all in this together

That is one of my favorite phrases, featured often in these blog postings of mine. Knowing that we are all having these same kind of dreams is just step one. Once we realize that, then we can get together to do something about it. We are, in fact, "in this together," and if we act on that basis, we can change the realities upon which our sleep-depriving fears are based.