#75 / A Striking Strategy For Social Change 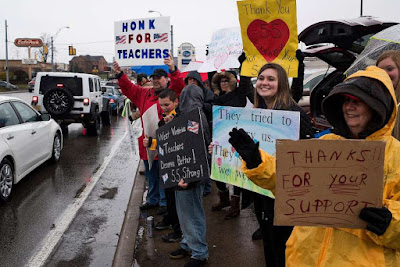 Jonathan Zimmerman is a Professor of History of Education at the University of Pennsylvania. Writing in the San Francisco Chronicle, Zimmerman says that "To win the gun fight, students should stay out of school."

Zimmerman thinks that a recent strike by teachers in West Virginia has some important lessons for those students who have stated their determination to get substantive changes in the nation's gun laws.

West Virginia teachers and service professionals just won an historic nine-day statewide strike. That strike ended in a deal that provides five percent pay raises for all educators and public employees and establishes a task force inclusive of educators to address a long-term solution to the state’s rising healthcare costs.

Here is the lesson that Zimmerman draws from the teachers' "striking success."

How did West Virginia teachers win a 5 percent salary increase earlier this month?

It’s not simply that they walked out of school. They resolved to stay out of school, until the state met their demands.

And that contains some important lessons for Wednesday’s scheduled national student walkout to protest gun violence. Students are planning to leave their schools at 10 a.m. on March 14 for 17 minutes, in honor of the 17 people murdered on Feb. 14 at a Florida high school.

But if the students want to do something that really reduces the gun carnage in this country, they’ll need to remain out of school for a lot longer than that. And the rest of us will have to rally behind them.


I have just wrapped up my course at UCSC, "Introduction To Legal Process," and Zimmerman's words rang a bell. In discussing "Law and Social Change," the course textbook said that there have really been only three ways that ordinary people have ever been able to prevail against the power of the wealthy, and of the corporations that have so profoundly corrupted our politics.

Number one on the list has been to support unions and organized labor. After that comes the use of governmental regulation to protect the public health, safety, and welfare. Number three in this short list is progressive taxation.

Those are the tools. That's what we have to work with.

On Wednesday, students all over the United States walked out of school for seventeen minutes. If we want to change the world, we need to be in it for the long run (so seventeen minutes is just the "tasting menu").

Let's start paying attention to the striking successes that walkouts and work refusal and comparable actions have had during American history. I think Zimmerman gets it right.

Let's get started on that longer run right now!