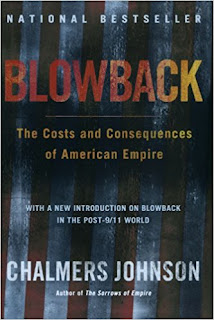 Moving on from optimism, let me recommend a recent "Tomgram," one of those bulletins that author Tom Englehardt calls an "antidote to the mainstream media."

Englehardt's posting on March 1, 2018, puts that "keep on the sunny side" admonition to a rigorous test. Here is a representative sample of what Englehardt has to say, his essay beginning with a reference to the book shown to the left:

"Washington created what was, in effect, a never-ending blowback machine. In those years, while the distant wars went on and on (and terrors of every imaginable sort grew in this country), the United States was transformed in a remarkable, if not yet fully graspable, fashion.

"The national security state now reigns supreme in Washington; generals (or retired generals) are perched (however precariously) atop key parts of the civilian government; a right-wing populist, who rose to power in part on the fear of immigrants, refugees, and Islamic extremists, has his giant golden letters emblazoned on the White House (and a hotel just down Pennsylvania Avenue that no diplomat or lobbyist with any sense would dare not patronize); the police have been militarized; borders have been further fortified; spy drones have been dispatched to American skies; and the surveillance of the citizenry and its communications have been made the order of the day.

"Meanwhile, the latest disturbed teen, armed with a military-style AR-15 semi-automatic, has just perpetrated another in a growing list of slaughters in American schools. In response, the president, Republican politicians, and the National Rifle Association have all plugged the arming of teachers and administrators, as well as the “hardening” of schools (including the use of surveillance systems and other militarized methods of “defense”), and so have given phrases like “citadel of learning” or “bastion of education” new meaning. In these same years, various unnamed terrors and the weaponization of the most psychically distraught parts of the citizenry under the rubric of the Second Amendment and the sponsorship of the NRA, the Republican Party, and most recently Donald Trump have transformed this country into something like an armed camp."

Distressing truth can be disempowering.

On the other hand, it might just galvanize some necessary action. Isn't that why those superhero movies do so well?

Here's the thing: the superheroes are going to have to be us!