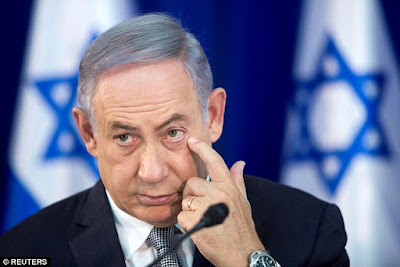 When people start talking about a politician's "base," who comes to mind? In our country, at least, most of us probably think of Donald J. Trump, who has bragged about the loyalty of his "base" on numerous occasions. Trump has asserted, for instance, and I think more than once, that he could "shoot somebody on Fifth Avenue," and he wouldn't lose a vote.

The picture above is of another politician who brags about his "base," Benjamin Netanyahu. Netanyahu has served as the Prime Minister of Israel since 2009. Recently, he has been linked by police to $300,000 in bribes, but Netanyahu is not worried. As The New York Times has noted, Netanyahu is "beloved by his base."

That "beloved by his base" phrase got me. Politicians should never be "beloved." At least, that is my contention.

The American idea of government is that each person is endowed by certain unalienable rights, and that all governmental power comes from the fact that we choose to grant our individual power to those who will represent us. We need to understand that transaction for what it is. The persons we elect to work for us have power only insofar as we continue to give them our power. If we start "loving" those officials too much, so that we excuse their excesses and deceits, we will lose the essence of what our democracy is all about.

Most of us, however, are not much cognizant of our own, personal and individual power. When we begin to experience power vicariously, not directly, we will be ever-tempted to provide unflinching loyalty to those to whom we have granted our power, in the mistaken idea that we become powerful through them.

This is a mistake to watch out for. It's what is wrong with the United States government today. The people of the country, considered either individually or collectively, are far more decent and honest than the president they have selected. Maintaining continued loyalty to someone who is not worthy of affection, to a person who is a cheater, a liar, or who takes bribes, will swiftly convert our democratic system into autocracy.

"Beloved by his base." That's not a good thing!