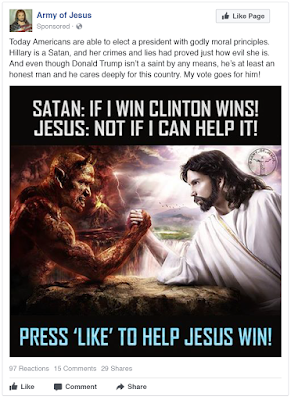 In the hard copy edition of the newspaper, a common headline extended over smaller, sub-headlines for both of these articles: "Indictment Bares Russian Network To Twist 2016 Vote." Scott Shane and Mark Mazzetti wrote an article on how Special Prosecutor Robert Mueller has, through a series of indictments, chronicled a social media war, carried out by Russians, that benefited the Trump campaign. One example of how that campaign was waged is shown above.

Back on The Times' editorial page, Ryan Goodman's column was headlined, "Now Let Mueller Do His Job." Goodman is a law professor at the New York University School of Law. Among his other statements, Goodman opined that the Mueller indictments were a "wakeup call," and that it is "now on Mueller's shoulders to keep the country and our democratic system safe from our Kremlin adversaries." Warning against any effort to stymie or stop the Mueller investigations, Goodman concluded his column as follows:

Friday’s indictments raise the stakes for our country enormously. President Trump and some of his most loyal supporters on the Hill must let Mr. Mueller and the F.B.I. complete the task. It should be all too real to Americans, what the costs are for our democratic system and our national security if public servants like Mr. Rosenstein, Mr. Mueller and the F.B.I. are delayed or disrupted in their mission.

While I completely agree that the Mueller investigations need to continue, and while I am quite prepared to believe that a Russian "troll farm" was responsible for politically-motivated social media ads during the 2016 presidential campaign (with or without "collusion" from candidate Trump), I don't think our main concern should be how to "keep the country and our democratic system safe from our Kremlin adversaries."

The kind of social media post illustrated at the top of today's blog posting may (as Muller's investigation seems to show) have been produced as part of an orchestrated campaign based in Russia, but that kind of ad could also have been produced by anybody, and my sense is that both the Trump and Clinton campaigns, and/or their supporters, produced such efforts to influence the electorate during the 2016 campaign.

In other words, the challenge to our democratic system is not "the Russians," it is how we can, together, try to insure that the information that is generated during campaign times can properly be evaluated and refuted, as appropriate. How can we insulate ourselves, and fight back against, the kind of inflammatory, lie-based social media campaigns that thrive upon and perpetuate the kind of political polarization and demonization of political opponents that truly do pose a threat to democracy?

There is no easy answer, and our First Amendment wisely provides that shutting down certain types of political speech is not the way to protect and preserve our political freedoms.

You can take it from Abraham Lincoln, it is going to be up to us to find a way out of this latest challenge to democratic decision-making. We, ourselves, are going to have to find ways to insulate ourselves from the miasma of artfully-constructed misinformation that the Internet and Social Media can now so easily bring us.

Finding the solution is a "do it yourself" project. We can't blame the Russians!