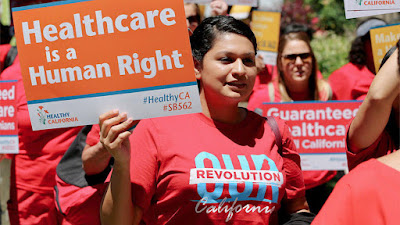 On Sunday, February 18th, The Mercury News ran an article about efforts to establish a single-payer healthcare system in California. A bill that would do that, Senate Bill 562, was introduced into the California State Senate on February 17, 2017, just over one year ago. The bill has failed to move forward, and the article accurately states that it is not expected to move anytime soon. Nonetheless, says The Mercury News, the single-payer idea is not going to go away. Advocates are "playing a long game."

The big problem for single-payer, according to most analysts, is its cost. The Los Angeles Times reports that implementing single-payer would cost $400 billion per year. The California Nurses Association, which has sponsored SB 562, disagrees. The real problems is politics, the nurses say.

Of course, the nurses are right.

We live in a "political world," which means that all features of the world we most immediately inhabit are subject to change, and whatever may be the current reality, we have the ability to change it.

Obviously, there are pros and cons about every aspect of our current arrangements, and there are pros and cons associated with every proposal to change those arrangements, too. A legislative analysis of SB 562, for instance, says that the bill "would require unprecedented changes to a mature healthcare system." Tampering with mature systems is somewhat risky. There are good arguments for not doing that. Still, that doesn't mean that we can't, or shouldn't, make changes to our current system, however "mature" it may be. After debate and discussion, we have the ability to make collective decisions that alter the current reality. That's how we govern the "political" world in which we most directly reside.

I happen to be a single-payer fan. I believe that such a healthcare system would recognize a fundamental reality of our human existence; namely, that we are "all in this together." The cheapest and best way to provide for health care that honors that principle would be to "self-insure." That is what the proposed single-payer system is really all about.

There is no doubt that insuring ourselves (and I mean everyone) would cost money. I'm willing to concede it would cost LOTS of money, though it's important to recognize the "savings" as well as the "expenditures" when we talk about good health care (including mental health care) for everyone. I am not so worried about the money. California is the "richest state" in the wealthiest nation in the history of the world. The money is out there, though currently sequestered by individuals who treat that wealth as if such individual wealth came, without collective effort, out of their own rear ends.

How do we want to spend "our" bucks? That's the question, and I believe that I have phrased the question exactly as it ought to be phrased. If we are "all in this together," and we are, spending the money developed within our economy on healthcare for all, instead of on schemes to send Tesla roadsters into space (to pick one expenditure that I don't see as a worthy one), seems like a good choice to me!

Of course, the final choice is going to be a collective one. We live in a "political world."

The nurses are right. It's all about politics, not economics! 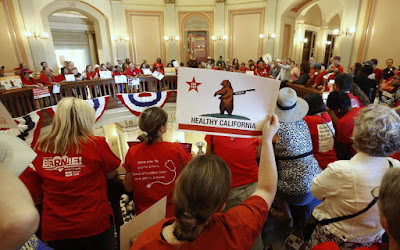