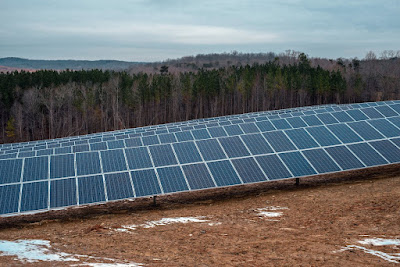 The January 24, 2018, edition of The New York Times not only had a front page article about school shootings (mentioned in my blog posting yesterday), it also carried an article with this headline: "New Tariffs Cloud Solar Industry's Bright Future." The Times' article observed, accurately, I think, that the new tariffs on the importation of solar panels, imposed by the Trump Administration, will make solar installations more expensive, and thus discourage them, not only undermining efforts to combat global warming, but also derailing a part of the economy that is increasingly providing good jobs.

What I thought extraordinary was the editorial in the January 24, 2018, edition of The Wall Street Journal. That newspaper is almost always positive about what our current president does. Not this time! Below, I am reproducing The Wall Street Journal editorial, in its entirety. It's somewhat long, but worth reading, and my suggestion is that we should all be telling our elected representatives in Congress that this "Trade War" should be stopped before it even starts!

Can Donald Trump stand prosperity? Fresh from a government shutdown victory and with the U.S. economy on a roll, the President decided on Tuesday to kick off his long-promised war on imports—and American consumers. This isn’t likely to go the way Mr. Trump imagines.

“Our action today helps to create jobs in America for Americans,” Mr. Trump declared as he imposed tariffs on solar cells and washing machines. “You’re going to have a lot of plants built in the United States that were thinking of coming, but they would never have come unless we did this.”

The scary part is he really seems to believe this. And toward that end he imposed a new 30% tariff on crystalline silicon photovoltaic cells and solar modules to benefit two bankrupt companies, and a new 20%-50% tariff on washing machines to benefit Whirlpool Corp. The tariffs will hurt many more companies and people, and that’s before other countries retaliate.

The solar tariff is a response to a petition filed at the International Trade Commission by two U.S.-based manufacturers—Chinese-owned Suniva, which filed for bankruptcy last year, and German-owned SolarWorld Americas, whose parent company filed for bankruptcy last year. Under Section 201 of U.S. trade law, the companies don’t need to show evidence of dumping or foreign subsidies. They merely have to show they were hurt by imports, which is to say by competition.

The two companies once employed some 3,200 Americans. But the wider solar industry, which depends on price-competitive cells as a basic component, supports some 260,000 U.S. jobs. Costs will rise immediately for this value-added part of the industry, which the Solar Energy Industries Association (SEIA) says includes the manufacture of “metal racking, high tech inverters, machines that improve solar output by tracking the sun and other electrical products.”

The Journal reported Tuesday that the Trump tariff may spur an unnamed panel manufacturer to invest in a new plant in Florida that will create 800 new jobs. But SEIA says it expects that the tariff will cost 23,000 U.S. jobs this year alone. It will also mean that billions of dollars of solar investments are likely to be postponed or canceled. Utility companies facing green-energy mandates from state governments will also suffer as it gets more costly to deliver solar-produced electricity.

Mr. Trump will also make doing the laundry great again, or at least more expensive, with a new 20% tariff on the first 1.2 million imported washing machines every year. Above that the tariff will go to 50%. Don’t even think about assembling a washer with foreign parts, which get whacked with a 50% tariff above 50,000 imported units in the first year.

Goldman Sachs analyst Samuel Eisner wrote Tuesday that consumers can expect price increases for new machines of 8%-20% depending on how much of the tariff the manufacturers decide to eat. Producers and workers are also losers. LG Electronics USA noted Tuesday that its new plant to make washers in Clarksville, Tenn., will be “the most advanced factory in the world” but warned that the tariff “hinders the ramp-up of the new plant and threatens many new U.S. jobs.”

Manufacturers will also lose flexibility in sourcing parts, which is critical to competitiveness. In South Carolina, where Samsung has a new $380 million appliance plant, the Trump tariffs aren’t welcome. Republican Gov. Henry McMaster is worried they’ll hurt the investment climate and invite retaliation.

Mr. Trump conducts trade policy as if U.S. trading partners have no recourse. With exports of $30.9 billion in 2016 and among the country’s highest level of exports per capita, South Carolina knows better. By justifying tariffs solely on the failure to compete, Mr. Trump is inviting other countries to do the same for their struggling companies. Their case at the World Trade Organization will also be a layup, allowing legal retaliation against U.S. exports.

By the way, if Mr. Trump thinks these new border taxes will hurt China, he’s mistaken again. China ran a distant fourth as a producer of solar cell and modules for the U.S. in 2017, after Malaysia, South Korea and Vietnam. Korea and Mexico are the two largest exporters of washing machines to the U.S. Mr. Trump’s tariffs are an economic blunderbuss that will hit America’s friends abroad and Mr. Trump’s forgotten men and women at home.