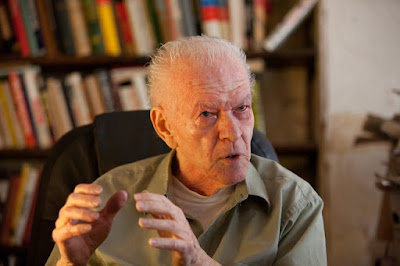 Pictured is Gene Sharp. Never heard of him? One quick way to get acquainted is to read his obituary, as published in The New York Times on February 4th. Sharp was born on January 21, 1928, and he died on January 28, 2018, one week past ninety years old. As The Times says, "Sharp was little known in the United States, but abroad he was a Forrest Gump of popular revolutions."

At one point, Sharp served as a secretary to A.J. Muste, a peace activist. I wrote about Muste in this blog almost eight years ago. Muste was a genuine revolutionary, and the kind of revolutions that he and Sharp promoted were all nonviolent.

If you like what you read in Sharp's obituary, then consider moving on to his books. Looking ahead, it's my prediction that we're going to have to sharpen up our understanding of how to bring about significant, substantive change in a nonviolent way. The alternatives to that are either no change, or violent change, which is where we seem to be heading. That is not very appealing!