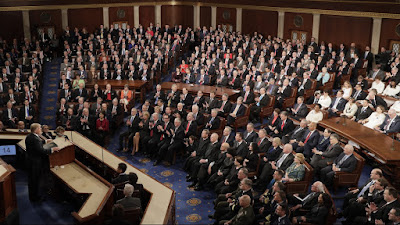 President Trump gave his State of the Union speech on Tuesday. You can click right here for a complete transcript. While a case can be made that the speech was hyper-partisan and divisive - and that is what Washington Post columnist Dana Milbank thinks - I, personally, saw the speech as rather unexceptional, with a rather traditional conclusion:

Americans fill the world with art and music. They push the bounds of science and discovery. And they forever remind us of what we should never forget: The people dreamed this country. The people built this country. And it is the people who are making America great again.

As long as we are proud of who we are, and what we are fighting for, there is nothing we cannot achieve.

As long as we have confidence in our values, faith in our citizens, and trust in our God, we will not fail.

Our families will thrive.

Our people will prosper.

And our Nation will forever be safe and strong and proud and mighty and free.

Thank you, and God bless America.

These sentiments (genuinely heartfelt as they may be) are quite conventional, and I believe the president's State of the Union speech is a typical example of personal and national self-congratulation. This is an art form cultivated by all presidents.

WASHINGTON — President Donald Trump stressed the need for "unity" Tuesday afternoon, hours before delivering a State of the Union address that White House officials have previewed as "bright and optimistic."

"I want to see our country united," Trump told network news correspondents during a traditional, and otherwise off-the-record, lunch at the White House where he made the case that the same national divisions encountered by his administration had plagued his predecessors as well.

The United States "was divided, not just under President Obama or President Bush. I remember the impeachment of Bill Clinton. Tremendous divisiveness, not just over the past year," he said, adding that he would consider uniting the country "a tremendous success."

So, Mr. President, just what kind of "Major Event" are you talking about? Something like the September 11, 2001, attacks on the Twin Towers, perhaps? Or maybe a war with that dangerous, and villainous, North Korea?

The way I get it, the president is suggesting that some sort of national calamity, some huge "Event," which is "usually a bad thing," might not be so bad if it turned out to help the president "bring the country together," to achieve a "great form of unity."

Frankly, I prefer the self-congratulatory happy talk of the State of the Union speech to the implications of the president's earlier remarks to the network news correspondents. Given who is making the remarks, I am nervous that our narcissistic president might decide that what he really needs to do is to create the "Major Event" that he thinks can bring the national unity for which he so deeply yearns.

I would like register not only my nervousness about the idea that a "Major Event" might be conjured up, as a way bring about some sort of national "unity," but to question the desirability of national "unity" itself.

Our current president's susceptibility to authoritarian ideas has been noted by many commentators. Authoritarians like "unity," because then there is no "dissent," no "opposition."

I don't think "unity" is a good thing. Quite the contrary. Our democratic government is based on the idea - on the reality, in fact - that there are many different, and conflicting, views within our society, and that the task of government is not to find a way to dispense with the differences, but that our government is the place where opposition and difference come to compromise. Our idea is not to demand "unity," but to move ahead with a governance that does not disregard difference, but learns how to live with it.

That is precisely what we need today, not "unity," but a celebration of our differences in a  common effort to reconcile the differences and move ahead together.

"E pluribus unum," our national motto, reflects not the elimination of "difference," but a celebration of the fact that out of all our differences we can act together as one.

I don't think that this is the way our current president understands it. Thus, I'm quite worried about just what kind of "Major Event" he might mean.