#30 / Are We Seeing Democracy's Last Gleaming? 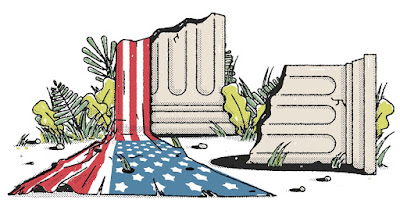 In addition to a couple of articles speculating on Melania Trump's "quiet rebellion" against her president-husband, the January 28, 2018, edition of The New York Times had some other articles worth reading, at least if you like reading about where American democracy might be heading.

In The New York Times Book Review, Adrian Wooldridge, who is a columnist for The Economist newspaper, reviewed David Frum's book, TRUMPOCRACY: The Corruption of the American Republic. The Times published Wooldridge's review under this title: "Twilight's Last Gleaming?" Here is how Wooldridge presents one of Frum's main arguments:

Trump grasped that America is suffering from an epistemological weakness as well as economic ones: The line between truth and falsehood is becoming dangerously blurred. ... America’s knowledge elite is partly responsible for this: Armies of postmodern academics had prepared the way for Trump by arguing that truth is a construct of the power elite. But the biggest culprit is technological progress. Digitalization is not only creating a deafening cacophony of voices. It is also making it harder to finance real journalism while simultaneously making it easier to distribute tripe.

United States’ democracy ... is based on knowing the difference between truth and lies. Truth leads to democracy, lies lead to dictatorship and this is where I think people, whether it’s the president or people around him, are not fully aware of the real impact of what they’re saying. It drives wedges between people, and if anything, these recent elections have told us that the population has become so polarized that people can be affected by lies that are peddled and empty promises that are made, tribalistic policies that are rammed down people’s throats, and you have to be really, really careful.

A long Opinion piece by Steven Levitsky and Daniel Ziblatt, both Harvard professors, was published in The Times' main section. Levitsky and Ziblatt pose the following inquiry: "Is Our Democracy Wobbly?" That was the hard copy title; online headlines will differ. Levitsky and Ziblatt hit on another concern, and one I am coming to believe may be central:

To function well, democratic constitutions must be reinforced by two basic norms, or unwritten rules. The first is mutual toleration, according to which politicians accept their opponents as legitimate. When mutual toleration exists, we recognize that our partisan rivals are loyal citizens who love our country just as we do.

The second norm is forbearance, or self-restraint in the exercise of power. Forbearance is the act of not exercising a legal right. In politics, it means not deploying one’s institutional prerogatives to the hilt, even if it’s legal to do so.

By calling for "forbearance" in politics, and in political discourse, Levitsky and Ziblatt are also raising the "truth" issue. The political debate and discussion that is central to democracy, and to democratic decision making, is premised on the idea that almost everyone has some claim to "truth." When one "side" decides that its views are "true," and that other opinions are "false," we lose the ability to make meaningful political choices by finding ways to agree about what to do, collectively, when no one really knows "the truth."

A commitment to "truth" is absolutely required if democracy is to survive. Amanpour is correct. "Truth leads to democracy." She is also correct in saying that when the population is polarized, people can then be affected by lies. If each one of us claims that we, and our "side," are the only ones who really know "the truth," the democratic process, which includes debate, discussion, conflict, and compromise, is stymied before it begins.