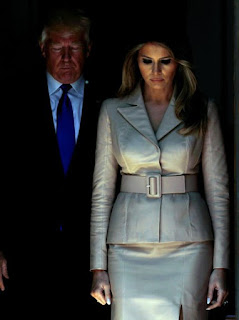 Maureen Dowd, a columnist for The New York Times, devoted her column yesterday to an analysis of Melania Trump's behavior, vis a vis her husband. Her husband, of course, just happens to be the President of the United States.

An "Opinion" piece by Kate Andersen Brower, a CNN contributor and the author of First Women: The Grace and Power of America's Modern First Ladies, also appeared in yesterday's Times.

Both Dowd and Andersen come to similar conclusions. Dowd believes that Melania Trump's last minute refusal to follow  her husband to Davos is part of her "rebellious vanishing act," and is only one example. Dowd sees that incident as part of the First Lady's intentional effort to critique her husband's character and conduct. She cites the picture below, which Melania published on the first anniversary of the inauguration, as a pictorial "slap" at the president, echoing a physical slapping away of her husband's hand in Israel, another of the actions taken by Melania that Dowd reads as a critique.

Brower  believes that Melania Trump is perpetrating a "quiet rebellion," and the headline on her Opinion column proclaims Melania Trump's "quiet radicalism."

Would it have been beneficial to Donald Trump for his wife to stand beside him in Davos and show a united front, as we have come to expect from first ladies? Absolutely. Does she care? Probably not.


This is, without doubt, the "gossip presidency." It's interesting to speculate about whether the First Lady is trying to do a political critique of her husband, by way of various "indications" of her personal dissatisfaction with how the president conducts himself. However, my own preference would be for all of us to be a little bit more forthright than Melania Trump. Specifically, I would like to see Republican Members of Congress start "slapping away" some of the president's most outrageous pretensions and conduct, and to do so publicly.

Until that happens, we may be stuck with the subterranean signals sent by the First Lady.

My thought? If I were Melania, I'd rather be hanging onto the Marine, too. 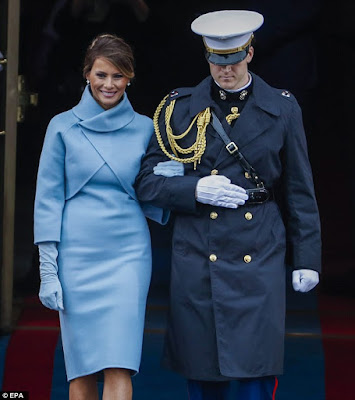