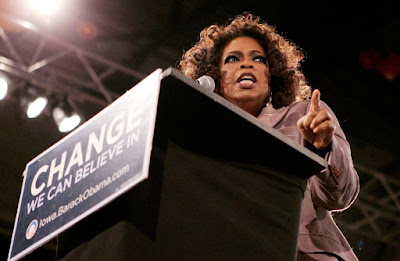 Joseph Epstein, writing in The Wall Street Journal, suggests that Oprah Winfrey is "the perfect candidate for Therapist in Chief."

Epstein's idea of the kind of person who will be successful as a political candidate is a person who can manufacture "curable grievances." The grievances spoken of must relate to the voters' current distress (whatever that might be), and the "cure," of course, will be to elect the candidate who has both identified the grievance, and who has a plausible case for being able to banish it.

It sounds like Epstein has a pretty good theory in hand to explain the 2016 political success of our most recently elected president. The New York Times, a week or so ago, ran a complete page of letters from those who voted for Mr. Trump in 2016. They still remember the grievances that motivated their vote, and most of them still seem to think that the president is providing the "cure" they hoped for.

Oprah Winfrey would be providing a different kind of "cure." According to Epstein, who cites to a famous book by social scientist Philip Rieff, "The Therapeutic" has triumphed, and a "sense of well-being" is now the end and objective of our political efforts, rather than our sense of well-being coming as a "by-product of striving after some superior communal end." In that sort of electoral universe, the "grievance" is an increasing feeling of social, political, and economic unease. The cure is "therapy," and Oprah Winfrey, the way Epstein tells it, is our very best national "listener."

The pull quote in the hard copy edition of the Epstein article said this: "At a time when actual qualifications no longer seem to matter, President Oprah is entirely plausible." That seems right to me.

As for my own views, I keep thinking that my well-being is going to come from successful efforts actually to solve real problems. I'm not looking for a therapist.