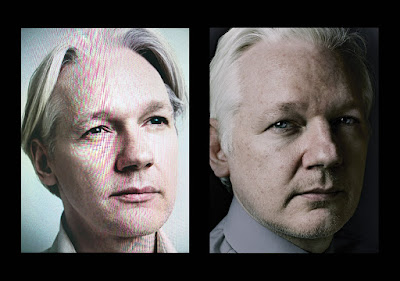 Julian Assange (pictured above) is the founder of Wikileaks. Both he and Wikileaks get mixed reviews. A profile in the August 21, 2017, issue of The New Yorker, for instance, "Julian Assange, a Man Without a Country," has both good things and bad things to report about Assange.

I was struck by a recent blog posting by Caitlin Johnstone, "Assange Keeps Warning Of AI Censorship, And It’s Time We Started Listening." Johnstone is a self-described "rogue journalist," and is a radical voice on the progressive side of the blogging spectrum. She doesn't have much use for establishment Democrats, and evidences some periodic sympathies for the Trump "base." She is not everyone's cup of tea, in other words.

Johnstone cites to a January 16, 2018, statement by Assange that is reproduced below. Read Johnstone's posting if you are as intrigued as I was by two things I gathered from the Assange statement:

First, Assange thinks that Google and Facebook are "digital super states," which he ranks right up there with the Chinese government.


I, personally, think Assange is right on target on both those observations! 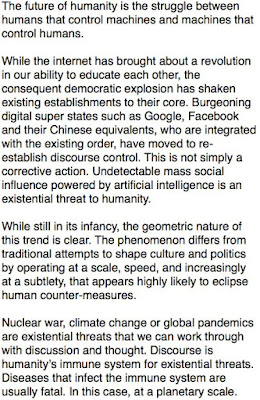