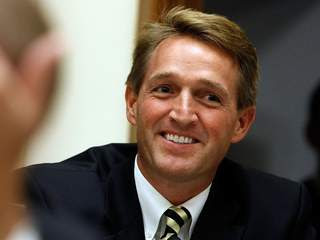 Arizona Senator Jeff Flake, pictured above, spoke on the Senate Floor on Tuesday, October 24, 2017. Flake's speech was a direct attack on our current president. A full transcript of Flake's speech was published by The New York Times, and you can click right here to read it.

In a separate news story, The Times quoted what is probably Flake's strongest statement, as follows:

"We must stop pretending that the degradation of our politics and the conduct of some in our executive branch are normal,” Mr. Flake said. “They are not normal. Reckless, outrageous and undignified behavior has become excused and countenanced as telling it like it is when it is actually just reckless, outrageous and undignified. And when such behavior emanates from the top of our government, it is something else. It is dangerous to a democracy.”

Writing in The New Yorker, Amy Davidson Sorkin commends Flake for saying what few other Republican Party politicians have been willing to say. The title of her Comment, "The Silent Majority," suggests that the majority of the Senate (who are, like Flake, members of the Republican Party) are afraid to speak out, though they, in fact, agree with Flake. They agree, but they aren't willing to say it out loud.

A failure to "speak truth to power" does damage to democracy. This is always true, and because it is true, Senator Flake deserves our thanks for being willing to speak out, and to voice his strong objections to the way the president is conducting himself, and to the way he is conducting the business of the nation.

But Davidson Sorkin is right to fault Flake for something else. The very same day that Flake delivered his powerful speech on the Floor of the Senate, pointing out how the president is abusing his office, and how Members of Congress are standing silent as he does so, Flake announced that he, himself, would not run for reelection next year.

In order for our democracy to function, people must not only speak out, and say what they think; they must also organize effectively to put themselves, or those who share their views, in a position to counteract abusive power with an opposing force. That may mean running for political office oneself. It most emphatically does not mean giving up a political office already held, and surrendering it to those who are abusing power.

Were Senator Flake to seek reelection, he might well lose to those who support our current president. No one can be certain of that, but by failing to run he nearly guarantees that result. He is making it easier for those who support the president to gain another Senate seat.

I agree with what Davidson Sorkin says:

The country needs people to speak out against Trump, but it also needs Republicans as well as Democrats to run against him. That will require people who still have something to lose to be willing to stake it by putting their names on a ballot. Democracies are meant to be noisy places. Perhaps Flake should start thinking about something beyond a series of lame-duck speeches or a lecture tour. What are his plans for 2020?