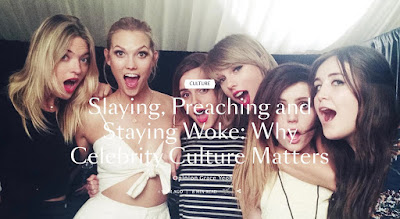 Who are these people?

I have every confidence that someone reading this blog posting will be able to identify each and every one of the celebrities pictured above. Unfortunately, I am just not "woke" enough to be able to do that myself. If you want to know what "woke" means, by the way (I had to look it up), here is the definition given by the Urban Dictionary. I do confess that the definition gave me a chuckle:

WOKE: A state of perceived intellectual superiority one gains by reading The Huffington Post.

The topic of this blog posting is "celebrity culture," which I think may actually be an oxymoron. I started thinking about celebrity culture because of a book review published in The New York Times on October 24th. Dwight Garner did a review of Sticky Fingers, a new biography of Jann Wenner, written by Joe Hagan. Wenner is, of course, the fabled editor and publisher of Rolling Stone Magazine. Garner says that Hagan's book makes a direct connection between Wenner, and Rolling Stone, and our current president:

Wenner and our current president are the same age, and Hagan draws a straight line between them. “The solar eclipse of Donald Trump signaled the complete triumph of celebrity culture over every aspect of American life,” Hagan writes, and Wenner helped lead us to the state we are in.

Because of this book review published on October 24th, I was already thinking about "celebrity culture" when I read an article published in the October 25, 2017, edition of The Wall Street Journal. That article discussed changes being planned at The Los Angeles Times by Ross Levinsohn, who was appointed as Publisher and CEO on August 21, 2017. It seems that big changes are in store at The Los Angeles Times, and here is the statement in The Journal's article that caught my eye:

Mr. Levinsohn plans to invest more in coverage of entertainment and culture.

If culture "eats everything," a proposition I recently explored, then it is not really good news that The Los Angeles Times has decided that the culture it wants to promote is "entertainment," and hence "celebrity."

We now know what has happened to our politics from making "celebrity" the focus of our culture. It hasn't been pretty!