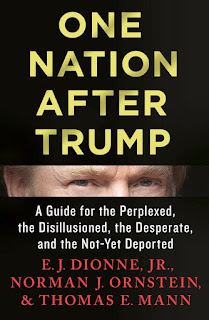 Here's a book that looks good! As is often the case, though, I can't really comment on the book itself, only on what I have learned from a review of the book. Sometimes, I think, reading a review may be enough to make an intelligent remark.

According to Ari Berman, whose review of One Nation After Trump appeared in The New York Times on September 26, 2017, the authors "were once known as the wise men of Washington." They all "worked at the city’s pre-eminent think tanks (American Enterprise Institute, Brookings Institution) and wrote for The Washington Post."

Berman further characterizes these pundits as persons with "center-left views," close with politicians of both parties, and "rigorously committed to upholding Washington’s bipartisan governing norms ... If there was such a thing as an intellectual establishment in Washington, they were it."

It is not completely clear whether Berman deplores or celebrates the fact that this description of "the wise men" must now be placed in the past tense. At any rate, Berman's review highlights the fact that upholding "the bipartisan governing norms" of past times is no longer the way these wise men roll. According to Berman, they have, in fact, used their considerable persuasive powers to help make that change in perspective prevail:

During the Obama era, their carefully cultivated bipartisanship gave way to a withering critique of the Republican Party. Instead of blaming both sides for gridlock in Washington and extremism in American politics, as so many commentators did, they squarely held Republicans responsible.

Speaking of how we ended up with our current president, the "wise men" have said that his rise to power "reflects the longer-term trends that have shaped the modern Republican Party." Specifically listed are a four-decade war on the “liberal media,” the delegitimization of political opponents, appeals to racism and xenophobia, and hostility to democratic norms. According to the wise men, Trump is less of an outsider than he seems, and this actually explains "why so many Republican leaders are reluctant to call out Trump’s excesses and to acknowledge the risks he poses to our political system.”

I am pretty certain that this analysis is on target. In other words, the Republicans in Congress, and elsewhere in our social, political, and economic life, don't challenge Trump and his excesses, both personal and political,  because Trump well represents the last forty years or so of the Republican Party's approach to politics.

The key to what we should do about it all, in my mind, is found in one of the elements that the "wise men" list: the "delegitimization of political opponents."

There is a kind of Gresham's Law of politics, because the principles that Gresham uncovered apply beyond the world of economics. Yes, bad money drives out good, but bad practice in almost any context drives out good practice. Once the athletes start doping, it gets to be a trend! Once one political party starts deligitimizing its opponents, the opponents will want to start delegitimizing right back.

I think we all need to be careful not to let the example of the Republican Party prevail, and we must strongly resist acting as if our political opponents are not "legitimate." That even includes the president.

In politics, we "all have something to say," and our politics will only be healthy if we all speak out freely, and if we give legitimacy to those with whom we disagree.

Accord your opponents legitimacy. Disagree. Go out and persuade the majority that you're right and that the other side is wrong. Beat 'em at the polls!

That is how we have to do it. The other alternatives don't spell out as "democracy."