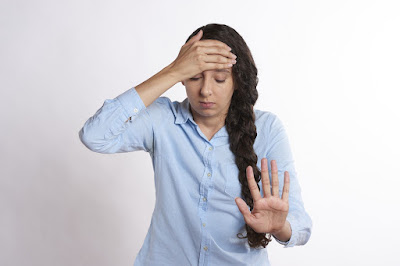 Why is this woman sick? That's a good question! As it turns out, the person expressing distress isn't actually a woman, and the malady being complained of isn't physical, but is political in nature.

I retrieved the image above from a posting on the Medium website, which captured, and republished, an online essay from Civic Skunk Works. The article that Medium republished was written by Nick Cassella, and was titled, "I am Sick of Having to Contact My Representatives."

I bet we all sympathize!

On the other hand (if I may permit myself a critical comment), Cassella makes the following observation at the top of his essay: "Contributor to Civic Skunk Works. I write about politics and economics—sometimes successfully."

Unfortunately (and here comes the critical comment), I don't think that this was one of Cassella's more "successful" writings.

Here is how Cassella starts off his article:

I am so sick of having to constantly contact my representatives. There are people who will tell you that this opinion reeks of privilege—and anyway, don’t you know that direct participation is the bread and butter of democracy? They’ll say that when you live in a democracy your rights come along with civic duties. If anything, they’ll smugly remind you direct contact with representatives shows the system is working.

I think it shows that something is rotten in the United States.

Call me lazy, but you shouldn’t have to call your representatives every week to remind them not to vote for a bill that the vast majority of their constituents disagree with.

In a functioning democracy, you shouldn’t have to check your inbox and Twitter feed daily in order to see whether or not some basic rights are about to be ripped away. And you certainly shouldn’t have to worry about your representative actually voting for such an abomination. In a democracy, you should conceivably be able to vote a representative into office and broadly trust that he or she would not require a barrage of emails and calls to vote in line with their constituents’ values ...

Today our politicians are in no way blind to our preferences. They are focus-grouped up to their eyeballs. And they have pollsters constantly working the field for them. They know what you think and why you think it.

The fact is our politicians largely don’t care.

As I said earlier, I bet we all sympathize - and I bet most of us suspect, as Cassella says, that our politicians don't really care what we think! Do we join with Cassella in feeling that something is "rotten" in the United States? I bet a lot of us do.

Nevertheless, what various unnamed "people" have told Cassella is actually true: "Direct participation [by us] is the bread and butter of democracy."

There are three basic ways that government can work, presuming that we all agree that we probably do need "government," though I understand the thought that maybe we don't.

If we do think we need "government," then the governing function can be performed by some person, or by some party or group, that asserts its own right to decide what happens, and how the governing will be done. In this sort of system, be it a monarchy, oligarchy, or full on dictatorship, the citizens are the "governed," not the "governing." That kind of system relieves the citizenry of any obligation to contact anyone, but this system of government is NOT associated with "democracy." In democracy, the "governed" are supposed to be personally involved in doing the "governing" themselves. Cassella's actual complaint, it seems to me, is that we are currently governed by an oligarchy, and the people doing the governing don't really think they have to respond to what the majority wants. Therefore, they don't. If that is true, then we have to do something about it, or just give in, and give up on "democracy."

If we don't like the non-democratic forms of government, and want to opt for a "democratic" form of government (and that has been our historical choice, here in the United States), then there are two ways to set up the system.

First, we can have "direct" democracy. That kind of democracy, very local in almost every case, requires citizens directly to govern themselves. Lots of meetings, and lots of governmentally-related work by citizens, are necessarily required in this kind of a direct democracy system. I bet Nick Cassella would get tired of that, too.

The system we have actually set up is the second way to have a "democratic" government. We call it "representative" democracy. In other words, the citizens don't do the actual work of governing themselves. Instead, they elect the people, who hire the people, who run their lives for them. That's the way I used to phrase it when I was serving as one of those representatives at the local level of government.

The "problem" with representative democracy is that sometimes (maybe even most of the time - and certainly right now in the United States) the "representatives" don't actually do a good job of representing the people they are supposed to represent. One way of dealing with this problem is for offended and outraged people to "contact their representatives," as a first step in a program to force the people's elected representatives to do what "the vast majority" want (though I think Cassella may underestimate the actual differences of opinion that exist within the society on almost all fundamental issues). I think it is fair to say that the recent failure of the Congress to "repeal and replace" the Affordable Care Act happened ONLY because millions of people "contacted their representatives." It was a lot of work, admittedly, but I think that the "vast majority" of the public didn't want what the majority of the elected representatives were preparing to do, and the people's willingness to "contact" those representatives, and to get all over them, made a huge difference.

I am sorry to say it, but there really isn't any way around this requirement that citizens get involved themselves - and spend a lot of effort on that, too - in times when their elected representatives don't really seem to care what the majority thinks, or wants.

If enough of the public gets "sick" of trying to make representative democracy work, the upshot will be no more democracy. That is actually what I see as the greatest of our current political dangers. I think there are many people like Nick Cassella who are "sick of calling their representatives," and just want some person who is "above" typical, rotten politics to come in and run the government the way the "majority" wants it run. A lot of people who feel that way voted for our current president, and for his claim to near-dictatorial powers, because they didn't think that our elected representatives in Congress were truly representing us. The upshot of an election based on anger at the failure of our elected representatives to do what we want might well be an executive dictatorship. And then there are people who think we should, perhaps, call in the military, to control our "crazy" president. I have heard that idea from some of my "liberal" friends.

Here is my advice to Nick Cassella, and to all of us who tend to feel the way he does about how our representative democracy is working right now: (1) Take an aspirin; (2) Call your representatives; (3) Form or join a political group and work to make it powerful; (4) Demand that your representatives actually do what the majority of their constituents want them to do; (5) Get some new representatives, if they don't!

Democracy is a definite bitch! Unless you are willing to let other people run your life, then keep reminding yourself about what those "people" told Cassella. It's true.

If you want self-government, you have to get involved yourself!