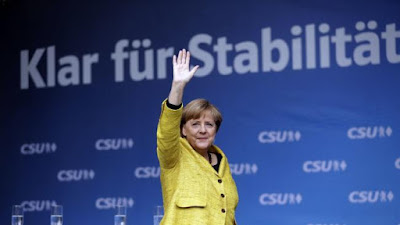 I have rather recently taken the position (right here in one of my blog postings) that political "pivots" aren't so bad.

The very thing that drives some people crazy about politics - that their political leaders shift positions - is actually not a mistake. It's not a defect. It's a feature.

Politicians so devoted to their "principles" that they never change their position on any issue is best represented, in contemporary American politics, by the Republican Party and its commitment to kill the Affordable Care Act (which the Republicans characterize as "Obamacare"). Many Republicans took that pledge, and have been determined to follow through on it, even though it's obvious that the majority of the public not only wants to maintain the current system, which expanded health care opportunities for the formerly uninsured, but actually wants to extend those opportunities even further.

On September 22nd, The Wall Street Journal ran an article about politics in Germany. In the hard copy edition that got thrown on my front walkway, the title was: "Merkel's Code: Embrace Change." Angela Merkel, in other words, has "pivoted" her way to reelection in Germany. Here's how the article described this phenomenon:

She has repeatedly — sometimes abruptly — changed position when the public mood diverged from the tenets of her conservative party.

What a concept! Merkel is a politician who actually seems willing to change her position when that's what a majority of the people demand, or want.

In this case, in Germany, the issue was same-sex marriage. President Obama made that exact same pivot. Remember?

Three cheers for democracy is what I say. I think it's just grand that we can force our elected officials to do what the majority wants.