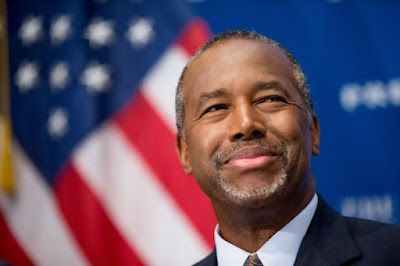 Pictured is a smiling Ben Carson, one-time candidate for president, now Secretary of the Department of Housing and Urban Development. He is a brain surgeon, too!

This picture of Dr. Carson accompanied an editorial statement that appeared in the August 14, 2017, edition of the San Jose Mercury News. As it turns out, Santa Cruz County, and the Silicon Valley, and California in general, are not the only places in the United States where there is an affordable housing crisis. In fact, there is basically an affordable housing crisis everywhere, with "the number of very low income households paying more than half of their income for rent, or living in substandard dwellings, or both, having increased 41 percent nationwide in the past 10 years and 66 percent since 2001."

Dr. Carson's prescription? Taking a "business-like approach on how the public sector can reduce the regulatory barriers so the private markets can produce more housing for more families."

In other words, the private market will produce housing that the ordinary and below-average income person can afford if we just get those outrageous "regulatory barriers" out of the way.

Hey, Mr. Brain Surgeon, the "private market" will not produce housing that can be afforded by persons with average and below average incomes, no matter how much you let them build, because the private market is aimed at making money for the developers and the builders. Here's how the Mercury puts it:


Dr. Carson, this is not brain surgery: Businesses that need to turn a profit will never produce decent housing for low or extremely low income Americans without subsidies.

Housing authorities are the local arm of HUD. And far from getting more money to deal with the increasing numbers of people who need housing, they are getting less.

If we, as a nation, care about producing housing that can be afforded by ordinary working families, and by the economically disadvantaged, then we are going to have to pool our collective resources (which means redirecting some monies held by the very wealthy) to use these resources to meet the basic shelter needs of our citizens.

More giveaways to developers won't do it. That's not "rocket science." That's not "brain surgery!"