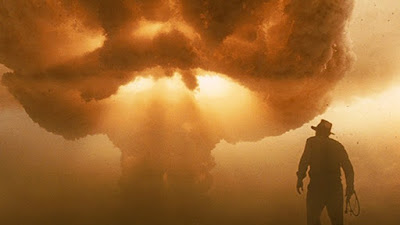 Donald Trump, the President of the United States, has been criticized (and I think quite fairly) for "normalizing meanness." I am not sure that it qualifies as "meanness," exactly, but the president has recently suggested that a United States' nuclear attack against North Korea might be forthcoming. The president has promised that unprecedented "fire and fury" will be rained down on that country if the leader of North Korea doesn't stop issuing threats against the United States.

That's a "turnabout is fair play" kind of reaction, I guess, because it is true that the Supreme Leader of the Democratic People's Republic of Korea, Kim Jong-un, has been making threats, and our president is not going to be outdone. Whatever may be the relative size of their hands, or the relative size of their private parts, Donald Trump can bring forth a bigger threat than Kim Jong-un, anytime, and our president isn't going to let anyone forget that, either!

It is, of course, of concern that our president might actually start a nuclear war, designedly or by mistake. That wouldn't be good.

I am now starting to worry about something else, though. The very fact that President Trump has advanced the idea that he might use nuclear weapons, and that reasonable and responsible people are beginning to discuss this as a real possibility, is "normalizing" the possibility of nuclear war - and is thus making it all the more likely.

It was an article in the Wednesday, August 9, 2017, edition of the San Francisco Chronicle that made me aware of this danger. Yesterday's paper had this headline on the front page of its print edition: "How would S.F. react to attack by nukes?" The article outlined various strategies that might (or might not) be useful in the case of a nuclear attack. My local paper, the Santa Cruz Sentinel, had a similar advisory article in today's newspaper:

The best thing to do in the event of an attack, experts say, is get inside, ideally in a basement or interior stairwell that puts as much building material between you and potential radiation as possible. Staying inside for 12 to 24 hours is best, but staying sheltered for at least the first hour is the most important.

“When you’re looking at a high population density area like the Bay Area, you can save hundreds of thousands of people from significant exposure if we just get people inside after the nuclear detonation,” said Brooke Buddemeier, a health physicist at Lawrence Livermore National Laboratory who studies the effects of nuclear detonations.

"Normalizing" the use of nuclear weapons is not something new. The article from which the picture at the top of this blog posting was taken highlights the concern, in the context of "resolving" Middle East conflicts through the use of "tactical" nuclear weapons. And persons in my age group remember Herman Kahn, and his "thinking about the unthinkable." Here's how Wikipedia explains Kahn's concept:

Unlike most strategists, [Kahn] was entirely willing to posit the form a post-nuclear world might assume. Fallout, for example, would simply be another one of life's many unpleasantnesses and inconveniences, while the "much-ballyhooed" rise in birth defects would not doom mankind to extinction because a majority of survivors would remain unaffected by them. Contaminated food could be designated for consumption by the elderly, who would presumably die before the delayed onset of cancers caused by radioactivity. A degree of even modest preparation – namely, the fallout shelters, evacuation scenarios and civil defense drills now seen as emblematic of the "Cold War" – would give the population both the incentive and the encouragement to rebuild. He even recommended the government offer homeowners insurance against nuclear-bomb damage. Kahn felt that having a strong civil-defense program in place would serve as an additional deterrent, because it would hamper the other side's potential to inflict destruction and thus lessen the attraction of the nuclear option. A willingness to tolerate such possibilities, Kahn argued, might be worth sparing Europe the massive nuclear exchange more likely to occur under the pre-MAD ["mutual assured destruction] doctrine.

I didn't like Kahn's concept then, and I don't like it now. We, the people, need to make clear that this mode of thinking is unacceptable, and rather than "thinking about the unthinkable," we need to make sure that the "unthinkable" becomes "impossible." In other words, we need to push for the total abolition of all nuclear weapons, everywhere. We can start at home, with the weapons we control!

It is my view, as previously expressed in this blog, and based on my experience, that people usually do what they think is "expected." Saying things like, "staying inside for 12 to 24 hours is best, but staying sheltered for at least the first hour is the most important...." gives the impression that being in the general vicinity of a nuclear attack is something like a major inconvenience. It's Herman Kahn-like thinking.

In fact, the use of nuclear weapons will really mean the end of the world - the human world, civilization, and what we might say is "the world as we know it."

As I said in this blog yesterday, every one of us should be making clear that we do not "expect," nor will we countenance, the use of nuclear weapons in any form, ever.

Discussing how to mitigate the damage of nuclear war (as per the San Francisco Chronicle and the Santa Cruz Sentinel) is most emphatically not the right way to confront the nuclear threat that hangs over the entire world.

Getting rid of the weapons? That's what we should be expecting! In fact, we'd better start insisting that this expectation be achieved. We had better get to work on it. Using any nuclear weapon, anywhere, is NOT normal. It's not acceptable. Ever! By anyone!

And that definitely includes the President of the United States of America.