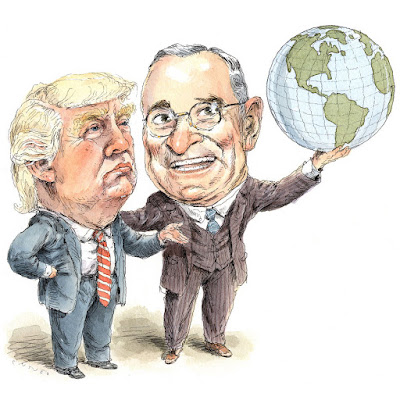 Roger Cohen wrote an opinion piece in the July 22, 2017, edition of The New York Times that was titled, "There's History, and There's 'History According to Donald.'" That was the title in the print edition. Online, the article is called, "Donald Trump's History Lessons." Cohen faults Trump for what might be called making up "fake history," though he doesn't use that term. He does end on a properly cautionary note: "History is no joke. It’s on the curriculum because it is only through it that the psyches of other nations can be understood and wars averted."

On the same day, but in a different newspaper, Walter Russell Mead pursued a similar topic. His July 22, 2017, article in The Wall Street Journal was titled, "What Truman Can Teach Trump." Mark down Mead as an optimist. So far, there is very little evidence that anyone can "teach" Trump anything. Nonetheless, Mead suggests that Trump could learn from Truman, should Trump be willing to pay attention to anyone besides that "Man In The Mirror," to cite to a Michael Jackson song.

Both Cohen and Mead are concerned with the United States' "place in the world," and the ability of the United States to provide world "leadership." With no apologies for our current President, figuring out how to continue on the path that the United States has pursued since Truman mighty not actually be the history lesson we need to learn. Maybe, we should ask Trump to learn from Eisenhower, instead of from Truman.

Eisenhower warned us all about the "military-industrial complex," and we might want to take a look in the mirror, as a nation, and do some thinking about that lesson. The results of studying that history might lead us to some new insights. It doesn't seem to me, for instance, that the policies pursued by the United States since the end of World War II have "averted wars," as Cohen implies. Truman's ability to "scare" the people of the United States into a belief in a "Cold War" as the foundation for United States foreign policy hasn't worked out very well, either, at least in my opinion.

As a history major during my undergraduate years, and from all the reading and thinking I have done since, I have definitely come to appreciate the importance of history. I'm with Cohen and Mead on that.

But you know the history lessons we really need to learn? It's what your mommy and daddy taught you. It's what your teachers said. It's what the coach of your baseball, football, or basketball team advised

LEARN FROM OUR MISTAKES?

In the councils of government, we must guard against the acquisition of unwarranted influence, whether sought or unsought, by the military-industrial complex. The potential for the disastrous rise of misplaced power exists and will persist.


We must never let the weight of this combination endanger our liberties or democratic processes. We should take nothing for granted. Only an alert and knowledgeable citizenry can compel the proper meshing of the huge industrial and military machinery of defense with our peaceful methods and goals, so that security and liberty may prosper together.