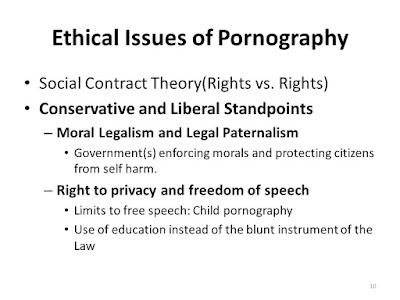 This summer, I have been teaching a course at the University of California, Santa Cruz, called, "Introduction To Legal Process." Normally, I teach a "Capstone Thesis" course for students majoring in Legal Studies. That course is called, "Privacy, Technology, And Freedom."

My summer class is using a textbook called, Law Justice, and Society, by Anthony Walsh and Craig Hemmens. Chapter 10 is entitled, "The Limits of Social Control: Policing Vice."

"Limits" is the key word. I think it's fair to say that Walsh and Hemmens disapprove of pornography, because of their view that it causes both personal and social "harm," but they nonetheless conclude that "freedom of speech trumps harm...." Pornography is here to stay, in other words, whether they (or we) like it or not. As noted in the slide at the top of this blog posting, child pornography is the exception.

As is pretty obvious to anyone who uses the Internet, there does not seem to be any effective limit, whatsoever, to the presence and availability of pornography online - at least not in the United States. China, with its "Great Firewall," may have had some success in cutting back on the instant availability of online pornography, but there is no such limit here.

Some people, of course, do NOT agree with Walsh and Hemmens that pornography causes the kind of "harm" that should lead to its suppression. Here, for instance, is the abstract of an article called, "Pornography and Freedom," by Danny Frederick:

I defend pornography as an important aspect of freedom of expression, which is essential for autonomy, self-development, the growth of knowledge and human flourishing. I rebut the allegations that pornography depraves and corrupts, degrades women, is harmful to children, exposes third parties to risk of offence or assault, and violates women’s civil rights and liberties. I contend that suppressing pornography would have a range of unintended evil consequences, including loss of beneficial technology, creeping censorship, black markets, corruption and extensive social costs.

Whichever side you may be on with respect to the harmfulness, or not, of pornography, technology may soon change the world of online pornography, perhaps eliminating those manifestations of it that are based on self-published pornographic pictures and videos. There are a lot of those! Thousands upon thousands of men and women routinely post pornographic pictures of themselves, inviting comments, and perhaps something more. My bet, though, is that the relative anonymity of these picture posting sites facilitates the practice. That could change. The readings I have been doing for my other course, "Privacy, Technology, And Freedom," suggest that online anonymity, where pictures are involved, may soon disappear entirely.

Specifically, commercially available facial recognition software is becoming so powerful that full information on any face found online may soon be easily available. Cheating wives (and husbands) and college students who post naked pictures online, have been assuming, I think, that the pictures won't, themselves, identify them. Facial recognition technology may soon demonstrate that this assumption will have to be reevaluated. As Walsh and Hemmens point out, "social control" is actually carried out more by "social pressures" and "customary standards" than by the law. If the "law" can't stop online pornography, because the First Amendment trumps majority "standards of decency," it may well be that technology can pick up the slack.

Before we all cheer too loud, however, about the wonders of technology, let's remember that the facial recognition software that might discourage online pornography will also strip everyone of us of any anonymity, at all, and that posting a picture on Facebook, documenting your trip to Yosemite, might let anyone in the world, or in the government, find out who you are, and track you from then on till forever.

Finding a way to curb the ability of the government, or of any person, to track you down, using modern technologies, is going to be a big challenge for the future. And pornography, I think, is the least of our problems!