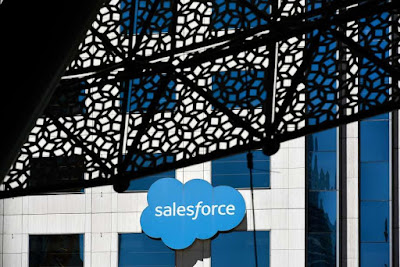 The Mercury News carried a story on Saturday, July 8th, documenting how Facebook is planning to make mammoth changes to the City of Menlo Park, building a "vast expansion" to the Facebook campus, to include retail shopping, a grocery store, parks, plazas, and hundreds of homes, all to accompany Facebook's new office buildings. Google is planning to reconfigure downtown San Jose, too, pretty much along the same lines, but at an even larger scale.

These city planning efforts indicate just how much our local "communities" have become mere adjuncts to massive corporate development projects. And then, there's Salesforce.

Salesforce, a software company with its headquarters and 6,600 employees in the Bay Area, has agreed to a 25-year, $110 million sponsorship of the 2½-block-long facility set to open next spring at Fremont and Mission streets. The deal includes naming rights, which means that the complex would be known as the Salesforce Transit Center. Similarly, the 5.4-acre rooftop open space will become Salesforce Park if the board of the Transbay Joint Powers Authority approves the contract [as, in fact, it did].

The facility that will soon be known as the "Salesforce Transit Center" has been known, heretofore, as the "Transbay Transit Center," and so far about 2.4 billion dollars in public money has been invested in this new facility.

What's in a name? An acknowledgment that our public institutions have been taken over by private, corporate capital.

We will end up thinking that private corporations are more "important" than the public itself, even though it is the public, acting through its government, that makes the wealth-producing activities of the private corporations possible, and even though it is public money that basically finances the facilities for which corporate capital is now going to claim the credit.

I'd like to think that the soul of our public institutions is not for sale. But... heads up! I might be wrong.