#197 / The Reinvention Of Politics 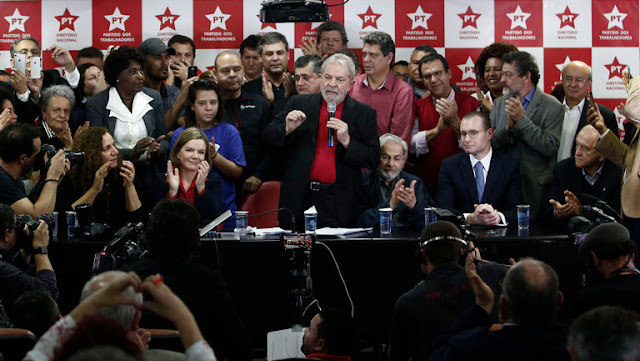 The photo above shows Luiz Inácio Lula da Silva, popularly known as "Lula," speaking in São Paulo, Brazil, on Thursday, July 13, 2017. Lula is the former president of Brazil, and he was speaking to his supporters a day after his conviction on corruption and money laundering charges.

Lula left office six years ago, and was, at that time, a widely popular political figure. He denounced his conviction as the product of a "deceitful judiciary that had wandered dangerously into politics."

Note that Lula seems to take for granted that there is some sort of fundamental distinction between judicially-enforced laws governing corruption and the realm of "politics." Keep your anti-corruption laws out of politics, says Lula, they don't belong there! Lula is pledging to run for President again, but that may or may not happen. If his conviction is upheld (meaning that the Brazilian judiciary doesn't buy into the distinction between anti-corruption laws and politics), then Lula will be spending ten years in prison.

Lula is just one of many former and current elected officials in Brazil who have been convicted of, or who are facing charges of, corruption. An article in the Friday, July 14th New York Times (print edition) provides a partial list, which includes politicians from all parts of the political spectrum.

On Saturday, July 15th, The Times carried another article on this topic, entitled, "Why Uprooting Corruption Has Plunged Brazil Into Chaos." Basically, that article elaborates upon the observation made by Lula that judicial efforts to enforce the laws against corruption can make "politics" dysfunctional. There is, in other words, a practical problem with rooting out corruption, in a political system in which corruption is taken for granted: "A stunning number of establishment political figures have been implicated, leaving the world's fifth most populous country with few credible leaders."

So, as both Lula and The Times seem be be saying, be careful about getting too hung up on combatting corruption. The results of the judicially-led campaign against corruption might be worse than the corruption itself. One of the possible horrors The Times sketches in its July 15th article is this:

Brazil is now as polarized as the U.S.” [said] Carlos Melo, a Brazilian political scientist ... If Lula is absent it would unquestionably open the space for an outside, very emotional leader, a bit like U.S. President Trump.

So, seen from Brazil, the election of Donald Trump as President of the United States is seen as a kind of horror story to be avoided. Many here, I think, would affirm that judgment, and while Donald Trump was not elected to the U.S. Presidency in a political environment in which a major issue was the kind of deeply-rooted "corruption" that prevails in Brazil, the above comment intrigued me. Is there, in fact, a parallel between current politics in the United States and the politics in Brazil? Did Trump's election here come out of some similar political situation?

I think the answer may be "Yes."

The Times July 14th article said that virtually every powerful political force in Brazil had been "discredited." The judicial assault on official corruption, taking place over the last several years, has discredited not only individuals but the entire "political class." This, it seems to me, sounds a lot like politics in our country.

In Brazil, political "corruption" has been exemplified by bribes and overt payoffs to individual politicians, and systematic corruption of this kind has "discredited" the entire "political class." In our country, a perception that our politics is "corrupt" is also widespread. While the "corruption" here has been of a different character, I think a good argument can be made that an increasing majority of voters believe that our entire political system is "corrupt," and that virtually every member of the "political class" has been "discredited." As in the case of Brazil, we also believe, many if not most of us, that a "stunning number of establishment political figures have been implicated [in the corruption of our politics], leaving ... [our] country with few credible leaders."

In such a situation, there is a real danger that a political outsider of some kind, a "very emotional leader," as the Brazilian social scientist rather gently put it, will be elected as the only available alternative to set of possible candidates who all come from the discredited "political class."

Such, I would argue, is precisely how we wound up with Donald Trump. He is definitely a "very emotional leader," who came from the "outside," and he won because virtually every other political leader who presented himself or herself (with the exception, I would argue, of Bernie Sanders) came from a "political class" that was, and is, and continues to be "discredited."

I recommend the two articles from The Times, not only for their reporting on what's going on in Brazil, but for some lessons we might think about with respect to our own politics. In fact, it seems clear that the "danger" that Lula warns of is a real danger, and that when attempts are made to reject an admittedly corrupt politics, and when the entire "political class" is then "discredited," the resulting upset of the politics of the nation may not be immediately positive.

That said, The Times July 14th article ends with a bit of hope:

Marina Silva, a former member of Mr. da Silva’s cabinet [and no relation to the former president] who broke ranks with his Workers’ Party in 2009, said the scandals plaguing Brazil’s dominant political parties could be a catalyst for a sweeping transformation that the country needs.

“Brazil’s current crisis requires the reinvention of politics,” said Ms. Silva, who ran for president in 2014 and is widely expected to enter the race next year. “This debate is not limited to Brazil, but extends to the world.”

The debate certainly extends to the United States. A "reinvention of politics" is precisely what is required.

In Brazil, and right here, too!