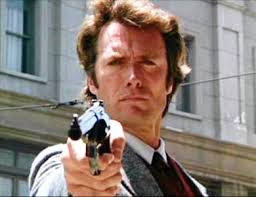 Here is Wikipedia on the origins of that "Make My Day" expression, an expression that springs to mind in various contexts and on various occasions:

The phrase "go ahead, make my day" was written by Charles B. Pierce, an independent filmmaker who is credited with "story by" in the film Sudden Impact. The actual origins of the phrase came from Pierce's father Mack, who used to tell him as a child, "Just let me come home one more day, without you mowing that lawn, son just go ahead.....make my day."

At the beginning of the movie, Harry Callahan (Clint Eastwood) goes into a diner for a morning cup of coffee where he discovers a robbery in progress. He kills all but one of the robbers in a shootout. However, the surviving robber grabs the fleeing waitress Loretta (Mara Corday), holds his gun to her head, and threatens to shoot. Instead of backing off, Harry points his .44 Magnum revolver into the man's face and dares him to shoot, saying with clenched teeth and in his characteristic rough grumble, "Go ahead, make my day," meaning that if the robber attempts to harm Loretta in any way, Harry would be happy to dispatch the robber. At the end of the film, Harry, again, says "Come on, make my day" just before shooting Mick the rapist, who aims his stolen shotgun at Harry's lover, Jennifer Spencer.

The "Make My Day" phrase (and might I even say this "beloved" "Make My Day" phrase) sprang to my mind when I read a comment by Amy Davidson in "The Talk Of The Town" section of the July 3, 2017, edition of The New Yorker. Davidson's comment was titled "Feeling Worse" in the print edition, and was titled "The Senate's Disastrous Health Care Bill" in the online version.

Davidson's comment documents the horrible effects the Senate health care proposal would have on millions of Americans:


In America, the category of the vulnerable is a broad one. Medicaid, for example, covers seventy-four million low-income Americans—a fifth of the population. There is no simple picture of this group; according to the Kaiser Family Foundation, thirty-four million are children, eleven million are disabled, and seven million are elderly, a large number of whom live in nursing facilities. Many of those people led middle-class or even affluent lives, until their savings were consumed by the cost of residential care, which, in large part, is not covered by Medicare; nearly two-thirds of nursing-home patients are, at some point, on Medicaid.

The Wall Street Journal's relentlessly right-wing columnist, Kimberley A. Strassel, has also been writing about the Senate health care bill. Strassel's June 30, 2017, column, "The Simplicity Of A Health Care Deal," hints, but doesn't quite predict, that the Senate will, in fact, pass a health care bill when it returns from its Fourth of July recess. To pass the bill, says Strassel, all the Republicans have to do is to make sure that whatever system emerges will cover pre-existing conditions. That, she suggests, should be an easy political choice.

I tend to think that Strassel is correct, in terms of her analysis of the politics governing the momentous choices ahead. I think it's likely that the Senate, the House, and then the President will all cooperate in passing legislation that will result in exactly what Davidson is saying the Republican health care "reform" efforts will accomplish. In short, the Republicans in charge of every branch of the federal government are likely to cooperate in enacting legislation that will be "catastrophic for Americans in all states."

Given that this catastrophic action is looming, perhaps progressives should not be trembling in fear or cowering with dread. In fact, shouldn't they be thinking themselves into a "Make My Day" state of mind?

If the Republicans in every branch of our government take action to give billions of dollars to the wealthiest, while they enact legislation that will have "catastrophic" impacts on the health care available to the rest of us, won't that give us a golden opportunity to sweep these bad representatives from office, and to replace them with elected officials who will make our government respond to our real needs? In the area of health care, that means Medicare For All.

If the Republicans pull the trigger on their catastrophic threat to the health care of our nation, I encourage a Clint Eastwood response.