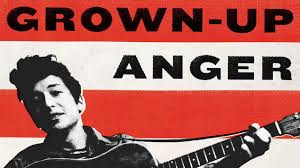 That book I got for Father's Day is called Grown-Up Anger. The author is Daniel Wolff, and the book is about Woody Guthrie, Bob Dylan, the American labor movement, American history in general, what happened up in the "copper country" on Michigan's Upper Peninsula, and what has happened in our country, everywhere, from the middle of the 19th Century till now.

Michigan's Upper Peninsula is a place, says Wolff, that "has some of the oldest rocks on the continent: gravel and sand and silt deposited by a billion-year old sea ... Down the middle of that peninsula, deep veins of copper settled. Northern Michigan is the only place on earth where this pure a copper lode is found this close to the surface."

Let me give you what Wolff says on the last pages of his book, in the Chapter called, "Underground." This is from Pages 258-259:

Between 2009, when the Great Recession officially ended, and 2013, America's wealthiest 1 percent accounted for 95 percent of the total growth in income. Meanwhile, average family income for 90 percent of American families dropped by more than 10 percent. And if you compare 2011 to 1973, the drop was nearly 15 percent. Four years after the housing bubble burst, there were five and a half million fewer full-time jobs. Over a third of the new jobs that did emerge were part-time. By June 2013, the nation reached a historic high of 2.7 million temp workers; jobs without benefits, the kind Joe Hill and the Wobblies were protesting a century earlier.

The year Dylan cut "Like a Rolling Stone," a typical male worker's income was about $34,000. Almost five decades later, the comparative figure was $33,000 ... Long-term unemployment was the worst it's been since the Dust Bowl.

The landscape of Keweenaw - its sandstone shores and low, tree-hovered hills - looks permanent. But beneath the surface is a history of change: caverns and pockets where molten rock once flowed, fault lines where whole sections of the continent slid and shifted ... This mix of elements goes down three to five miles; the earth's crust. On it, our lives are lived; in it, we plant our crops, bury our dead. This crust floats on what's known as the earth's mantle: a huge, rocky shell eighteen hundred miles thick. And inside the world's shell is a molten core, a kind of rage.

You could start there.