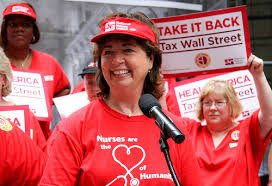 An article printed on the first page of the June 12, 2017, edition of the Santa Cruz Sentinel said this: "Nurse union boss does not play nice."

Look above! There she is, RoseAnn DeMoro. DeMoro is the head of the California Nurses Association, and I guess that her nice smile, as pictured in this blog posting, wouldn't seem so friendly if you were one of those 1% people from Wall Street and didn't like her "Tax Wall Street" message.

The people complaining about DeMoro most recently, though, at least the ones mentioned in the Sentinel article, were not Wall Street 1%ers. They were Democratic Party politicians from California. Why were they so upset? How did DeMoro demonstrate that she doesn't "play nice," as far as those Democratic politicians are concerned?

Well, DeMoro actually informed the public, by name, which Democratic Party legislators failed to vote for SB 562, a bill sponsored by the California Nurses Association, and legislation that seeks to establish a "single payer" health care system in this state.

It seems to me that the complaints against DeMoro are an example of the thing President Harry S. Truman talked about. Truman was known as a "straight shooter," and his supporters used to yell at him, "Give 'em Hell, Harry!" Truman's classic response was this:

"I never give them hell. I just tell the truth and they think it's hell."

The California Nurses Association has been working for decades to overhaul the health care system in this state, and is currently supporting Senate Bill 562. SB 562 would establish a "single payer" health care system in California. If you want to read the current version of the bill, entitled, "The Healthy Califoria Act," just click the link.

Without trying to argue the pros and cons of the bill in its current form (and there are definitely arguments on both sides), I want to suggest that it is never "unfair" to deny politicians the ability to hide their votes and their actions. The voters often lack information about what politicians and elected officials actually do, and this lack of information screens those elected representatives from having to account to their constituents for what they are doing on behalf of the constituents. Representing those who elected you, of course, is actually what elected officials are paid to do, and it does seem pretty "fair" to let those who are paying the bills know what you are doing (or not doing) in their name.

If an elected official can't stand behind his or her vote, or doesn't want the voters to know about some other action or inaction, then Harry Truman has another piece of advice:

If you can't stand the heat, get out of the kitchen!

Why do so many people hate politics? I think it is because so many politicians and elected officials are fundamentally dishonest, and try to disguise their genuine views and their actual actions. These politicians and elected officials seem to think that "being nice" to them is what politics should be all about. Or, in the alternative, they pretend to think that this is what politics is all about, hoping to avoid scrutiny and disagreement.

Guess what? Being "nice" to elected officials is NOT what it's all about. Making our representatives actually do what we want them to do is what politics is all about - or what it ought to be all about. That's Rule #5 in those "Five Simple Rules" that I keep mentioning.

My advice to RoseAnn DeMoro? Keep smiling, RoseAnn! And, please, let me introduce you to my old friend, Harry.