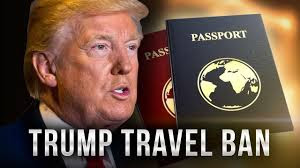 According to the website of a Corpus Christi, Texas television station, from which the image above was taken, "Donald Trump's administration is pledging a Supreme Court showdown over his travel ban after a federal appeals [court] ruled that the ban 'drips with religious intolerance, animus and discrimination.''

The Wall Street Journal, in a May 26, 2017, editorial, also opined that the president's travel ban is "now teed up for the Supreme Court." The Journal went on to blast the Fourth Circuit's decision on the following basis:

Both the Constitution and statutes passed by Congress endow the President—any President—with broad authority to deny admission to foreign nationals to protect U.S. interests. The courts can narrowly engage, but the Constitution gives the political branches dominant authority on immigration and foreign policy.

Under decades of Supreme Court precedent, the government only needs to show that some immigration action has a “facially legitimate and bona fide” justification. The Trump Administration argues the ban is a temporary pause to improve security vetting, and Congress and even President Obama singled out the six nations in 2016 as countries of concern for exporting terror and increased visa scrutiny.

The Journal's statement of the law, while one-sided, does make a good point. "Deference" to elected officials is the default position of the courts, and never more so than when it comes to the powers of the president to decide on matters of national security. Maybe, as the Trump Administration is promising, there will soon be a "showdown" in the Supreme Court, so the Court can decide whether this kind of traditional "deference" to the president on national security matters should prevail, even if the president's action is dripping with "religious intolerance, animus, and discrimination."

Maybe that will happen, but if I had to bet, I would bet that there is NOT going to be any "showdown" on these questions. Here's something that not everyone understands. The Supreme Court doesn't have to "take" a case, and to make a decision, unless it wants to. The president, in other words, has no "right" to have his "showdown" in the Supreme Court.

I, personally, think that the Court might well decide that it would NOT want to validate the president's exercise of his power in this instance, precisely because that would essentially say that his powers are not limited by anything, from common decency to the Bill of Rights. On the other hand, I don't think that the Court would be very wild about the idea of trying to limit the president's powers, either.

I think (we can all wait to see) that the Court is most likely to dodge the issue. The Circuit Court decisions against the travel ban all render it inoperative. No Circuit Court (at least so far) has said it's valid, so unless the Supreme Court wants to validate an action that most surely does "drip," it can best do nothing, with no prejudice to the future exercise of presidential authority (by a different president).

As I say, let's see where this "showdown" shows up or not! Some informed observers suggest that my prediction - no showdown coming - is quite likely going to prove right.