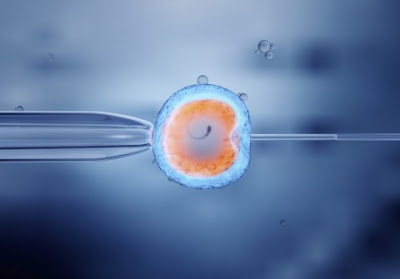 The headline on a front-page article in the May 17, 2017, edition of The New York Times caught my eye: "Making Skin Cells Into Babies?" If you click the link, you will find that the online headline is just a bit different, but the article is the same. To the extent that the headline poses a question, the article provides the answer: "Oh, yeah. It's coming. Skin cell babies are on the way. It's just a matter of time!"

My May 17th blog posting was focused on the presidential aspirations of "The Rock," a professional wrestler and film star who is apparently hoping to be our next Chief Executive. My final line of that blog posting came immediately to mind, as I read about the new techniques that can turn our skin cells into babies:

According to the article in The Times (and it's no surprise), the Catholic Church is against the idea of using genetic manipulation to create new human beings. I do believe that these kinds of genetic manipulations pose some important "religious" questions worth thinking about, but "religious" issues are probably not what first pops into most people's minds, as they consider the potential of a technology that turns skin cells into babies. At least, that's my bet.

I think that the "yuck factor," raised in the article by Arthur Caplan, a bioethicist at New York University, is probably what would first strike many people about this new idea of how to populate the planet. As Caplan says, “It strikes many people as intuitively yucky to have three parents, or to make a baby without starting from an egg and sperm." Caplan, though, goes on to argue that this initial reaction can, or will, be overcome, and all to the benefit of humanity, or so I interpret his remarks: "It used to be that people thought blood transfusions were yucky, or putting pig valves in human hearts.” Not anymore, and thank goodness for that, right?

Human beings can, and usually do, approach life from a purely "pragmatic" or "instrumental" perspective, and this is the perspective I think that Arthur Caplan suggests is appropriate. Will it be useful or helpful to be able to manufacture new human beings from skin cells? It may sound "yucky," initially, but if it "works," why not?

Of course, there is that "what could possibly go wrong?" inquiry. But from a "pragmatic" approach the "what could go wrong?" question just raises the need to be careful, and thoughtful, as we advance this new technology. Sure, something possibly could "go wrong," but let's work to eliminate the potential problems to get the benefits. That's the pragmatic way to deal with the uncertainties of any new technology, from genetic engineering to nuclear weapons. I think this pragmatic approach to the new technology is the response that most people will have to the "yuck" factor, and to the concern that we may not fully appreciate the potential problems that human-manufactured humans could cause.

Let's just briefly revisit those "religious" questions, however. Those questions are premised, ultimately, on the idea that "pragmatic" approaches to how we conduct ourselves must not be allowed to become the "bottom line" for how we act.

Killing other people, for instance, is considered "wrong," or "unacceptable," but it is actually a very "pragmatic" way to deal with people, in many situations. You can see the erosion of this fundamentally "religious" principle ("Thou shalt not kill")  in the way police officers seem increasingly to treat confrontations with potentially dangerous persons. Our program of permitting our president to solve perceived terrorist threats by dealing out a "death by drone," based on his personal decision about who should live and who should die, is another example.

The "pragmatic" way to deal with a situation in which a police officer confronts a potentially dangerous person is for the officer to kill that person. Same with killing possible terrorists who aren't, at least the time they are killed, engaging in any terrorist act. Get them at a wedding, when they're not suspecting it! This idea, that it is "ok" to kill potentially dangerous persons, is not necessarily "nice," but it is a "pragmatic" solution to some real problems. And that is just what is happening, more and more.

On the other end of the scale, life "creation," as opposed to life "destruction," can be evaluated, as Caplan's remarks suggest, using the same "pragmatic" approach. Caplan is suggesting that turning skin cells into babies has much to recommend it. And maybe it does. However, I think we should consider those "religious" questions, as old-fashioned and "outmoded" as they might seem to be.

Who are we? That is a fundamental question, and a fundamentally "religious" question. I believe that we are creatures who have been born into life on this lovely Planet Earth. Whether there is a "God" who created us, or our creation depends on some mysterious other process, most usually called "evolution," doesn't really matter much, in the end. The fact is that human beings do not "create" themselves.

Except, of course, maybe we can, or should, or will in the future. Skin cells into babies? Why not? Once human beings not only feel free to destroy the Natural World, to support activities which we believe will bring us "pragmatic" benefits (and that is our current situation), why not allow human beings to create themselves, too? That's what the skin cells into babies technology really means. Human beings will be manufactured by human beings. We can, finally, truly achieve our desire to fill the role that God, or Nature, seems to have been given in the original conception.

Deciding to let human beings manufacture other human beings, so we eliminate the idea that we are "creatures" subordinate to a God, or to Nature, raises profoundly "religious" questions. If there nothing inherently "right" about those religious commandments, and if the tests of "pragmatism" are really the only test we need to care about, then the limitations that we have always accepted as basic constraints on our human action may be disregarded.

Is it actually "ok" to substitute human beings in for God, or Nature? This is a "religious" question, to be sure, but I think there is a "pragmatic" inquiry that inevitably comes along with it, for those who think that we should evaluate our human existence from a "pragmatic" point of view. When human beings become manufactured products, instead of the mysterious and miraculous creatures we have always thought ourselves to be, what will be the consequences of that transformation?