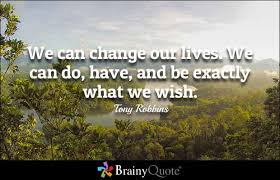 Tony Robbins, who is responsible for the "Brainy Quote" reproduced above, is a "success coach."

What about Donald J. Trump?

Anyone seriously concerned about the future of the United States of America must surely be asking herself or himself this question: "Why did anyone vote for that guy, and why does he continue to appeal to lots of people?"

I have come to the conclusion that while our president is narcissistic, self-absorbed, a prevaricator, and with little or no understanding of government, he does possess at least one characteristic that has very significant value for those who support him. Donald J. Trump communicates the same "success coach" message that Tony Robbins delivers: "We can do, have, and be exactly what we wish."

In bringing that message to the nation, President Trump provides very significant value, because while "wishing (alone) can't  make it true," wishing is always the first step. The value of the president's message is in its inspirational qualities, as it tells people that our nation can, in fact, accomplish great things. I am convinced that this positive message is what is sustaining President Trump's popularity.

The truth is, we CAN "do, have, and be exactly what we wish," in the sense that our human reality is open to infinite possibility. The World of Nature has rules and laws that are not susceptible to modification, but within our world, the world we create, virtually "anything" can be done. Anything for good, and anything for ill. We can build upon our dreams, or upon our nightmares, but our future is always open. As Hannah Arendt says (and I doubt she'd be a Trump supporter), we always possess the ability to do something unexpected, and new, and to begin some new chapter, some new story that has never been told, or heard before.

Many, if not most, people in the United States are very unsatisfied with our government, and with the state of our social, political, and economic reality. And many people have a sense of despair when they look to the future.

Our President says that can be changed.

Let's give him credit. He is right about that. And remember that President Trump always says that what will be coming is "huge," "beautiful," "perfect," the "best ever." He says we can "make America great."

I guess this posting today is just a follow up to my notes on the need to prioritize "insistence" over "resistance," as we consider our political situation.

Those who would like to replace the guy who is currently "in charge" of the Executive Branch had better have a positive program.

A positive program CAN be accomplished. Our wishes can come true.

Wishes, of course, are not self-fulfilling. "Corny" quotes contain great truths, at least sometimes! "Wishing" is only step one: 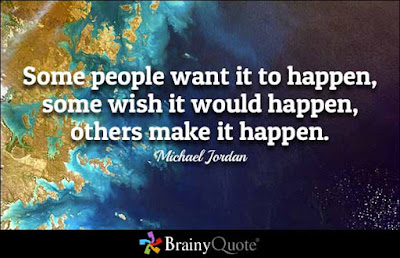