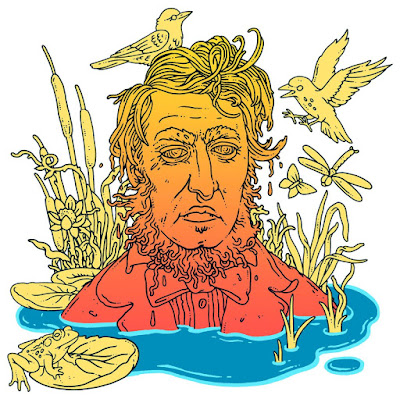 The image above is of America's beloved "first environmentalist," Henry David Thoreau. The illustration comes from an article in the October 9, 2015, edition of The New Yorker. That article, by Kathryn Schulz, is well worth reading. It is titled, "Pond Scum," and is subtitled, "Henry David Thoreau’s moral myopia." The picture itself, as it appears in the magazine, is graced with the following legend: "Why, given his hypocrisy, sanctimony, and misanthropy, has Thoreau been so cherished?"

Based on what Schulz says in her article - and she makes a good case - I may have  been hasty in characterizing Thoreau as our "beloved" first environmentalist. Maybe that "beloved" part should be discarded. Schulz pretty much concedes that Thoreau is "beloved," and "cherished;" her point is that he shouldn't be! However hypocritical, sanctimonious, and misanthropic Thoreau may have been, however, Thoreau is still our "first environmentalist."

A book review in the Saturday/Sunday, April 29-30, 2017, edition of The Wall Street Journal (not Schulz's New Yorker article), is what has stimulated this blog posting. That review, which appeared in the print edition of The Journal as "America's First Environmentalist," was written by John Kaag. Kaag's review does give Thoreau some positive press, although it omits any reference to him as "beloved." In the online version, which is what you will find if you click the link, Kaag's review is headlined, "How to Live Like Thoreau."

Just a warning: read Schulz to see how Thoreau actually lived, before deciding how much you want to follow in his footsteps.

The books that Kaag reviews are The Boatman, by Robert M. Thorson, and Thoreau and the Language of Trees, by Richard Higgins. I was mainly interested in Kaag's review because of some references to how Thoreau came to understand the relationship between the World of Nature and the human world that we create:

For Thoreau, New England watersheds of the 19th century represented the abiding challenges of the Anthropocene epoch, an age in which the Earth’s ecosystems and geology have been dramatically altered by the forces of human civilization ...

A dam and canal had been constructed and later expanded, decimating populations of salmon, shad and alewives. Fish weren’t the only ones affected by the dam; the meadowland surrounding Concord was now routinely flooded. Thoreau’s neighbors, whose farms relied on haymaking, risked losing their livelihood. This tension between meadowland farm and factory, between nature and human progress, would become what is termed the “flowage controversy,” and Henry would be in the middle of it ...

Thoreau longed for a time when, in his words, “the ‘grass-ground’ river will run clear again,” and he turned with fury on the industrialists whose damming and blasting threatened to obliterate the rivers [he] once loved ... This warring spirit on behalf of the natural world is well documented by Thoreau scholars. What has not been documented, to this point, is the exact way that Thoreau’s rage gave way to lament and, more important, ultimately to a more constructive acceptance of a world both natural and human-made [emphasis added].

At the end of the flowage controversy, the industrialists won, but, according to Mr. Thorson, so did Henry David Thoreau. He reached a deeper, more complex understanding of the delicate relation between humans and the natural world. “His pioneering river science of 1859-1860 did not position humans as masters and commanders of their watersheds,” Mr. Thorson explains, “as did the engineers of his day. Instead he saw human actions as hopelessly entangled with natural ones.”

It would seem, from what Kaag writes about Thorson's book, that Thoreau did understand, after a lifetime of experience, that humans were not supposed to act as "masters and commanders" in their relationship to the World of Nature. Instead, Thoreau apparently came to believe that human actions and the Natural World were "entangled," and that there was some sort of "constructive" way to accept the fact that the world is both "natural and human-made."

We do learn that Thoreau's initial "rage" against the modification of the rivers he both loved and knew so well was transformed into something different, but what was that? What was the exact nature of that "constructive" relationship he is supposed to have ultimately accepted?

The emphasized portion of the quotation above talks about "a" world that is, at the same time, both natural and human-made. My "Two World Hypothesis" suggests that we should not see the world in such a "unitary" manner. When we "the world" as unitary, being "both natural and human-made" at the same time, the entirety of that unitary world is the theatre in which human action is appropriate, and there is no reason to think that the ultimate human idea about the world should be anything different from the idea that we are the "masters and commanders" of all that is.

In fact, this is how almost everyone sees the world. There is only "one," and humans are, ultimately, in charge.

I like to try to force myself to see our "human world" as something different from, and subordinate to, the World of Nature, upon which everything we do depends. While we "can" ignore the limitations of the Natural World, if we recognize we are doing that, we will at least retain an opportunity to "abstain," to decline to "engineer" the world to our specifications, recognizing that we are creatures, like all others in the Natural World, and that we absolutely and utterly depend upon the Natural World to sustain our lives and all our efforts.

If we destroy the rivers (and the fields) one by one, as Thoreau watched happening in his time, then our human world will, ultimately, perish as well. When we see how cavalierly humans dismiss the limits of the World of Nature, acting as though we were its "masters and commanders," it is easier to see why Thoreau might have moved towards misanthropy.