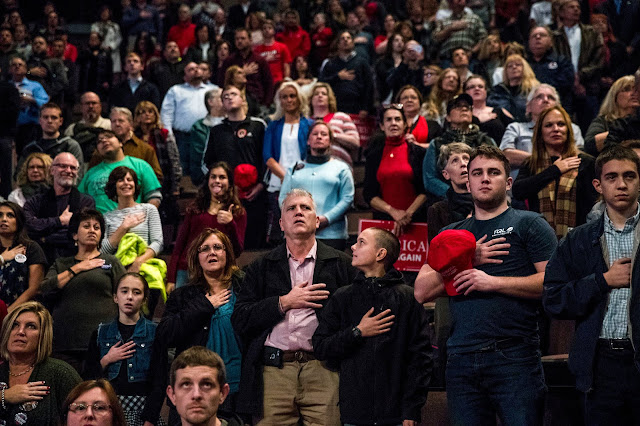 In a column in the March 29, 2017, edition of The New York Times, Eduardo Porter talks about the  somewhat compromised brilliance of Donald J. Trump. Porter finds Trump's "diagnosis" of the problems confronting our nation to be right on target, but he thinks that the "cure" that Trump proposes is off the mark.

That summary of Porter's article is spelled out as the headline for the column in the print edition of the paper: "Diagnosis? On Target. The Cure? Misguided."

The online version of Porter's article has a slightly different headline, referencing the word "carnage," which the president employed in his inaugural speech, to describe "the crime, and the gangs, and the drugs that have stolen too many lives and robbed our country of so much unrealized potential." As the president said then, "This American carnage stops right here and stops right now."

President Trump's "brilliance" is the brilliance of his political presentation, his description of what ails the nation, his "diagnosis" of our problems. As I said a week or so ago, the president's campaign slogan, "Make America Great Again," was, indeed, brilliant.

In his inauguration speech, and in his first address to Congress, the president touched on themes that resonate with a great many Americans. The devoted audience pictured above (admittedly 100% white, it would appear) is listening to the national anthem at president Trump's post-election rally in Cincinnati, Ohio, in December 2016. The audience is hopeful and expectant. All present are hoping that better days are coming. They "believe in" the president because he has identified, so clearly, what they feel are the main problems of the nation. We are always comforted when the doctor has a diagnosis, instead of telling us that he or she doesn't have the foggiest idea of what might be wrong.

Unfortunately, as the fairly recent debacle of the health care reform effort in Congress demonstrates, president Trump and his confederates are, exactly as Porter says, a lot better at "diagnosing" what large members of the public think of as our political disease than they are at putting forth and actually enacting ways to cure our ailments.

I think the reason for this is pretty clear. Trump's experience and expertise are in the arena of performance and display. Whether it's his Miss America and Miss Universe and related pageants, the gaudy hotels and country clubs, the "reality" television of "The Apprentice," or his "Make America Great Again" campaign, Trump really is "brilliant" in his talent for showmanship.

"Politics," as many have bemoaned, has become nothing besides showmanship. It has become, like stand up comedy, a type of "entertainment."

President Trump is definitely "entertaining." But what about running the government? He's not any good at that, at all.

"Politics," in fact (real politics, I'm talking about), is not a "show" put on by "politicians" on stage for all the good souls standing in the audience. Real politics takes place in and among the audience itself, as they discuss and debate what they want to accomplish and how to accomplish it. Once they have done that, they then need to go on to demand that their governmental institutions (and the politicians who run them) actually perform, and follow the "prescription" that the people themselves have decided will address their complaints and realize their aspirations.

If the American people want to cure the catalogue of diseases that we can all so easily diagnose (a list that certainly does include the criminal "carnage" on our streets, and inside our massive prison system, too), then we will need to engage ourselves, with our neighbors, to determine for ourselves what prescription we think will work. Democracy is based on self-medication, not on a "medicine show," placed on display for our review.

A political party that can advise and assist us, as we recover genuine self-government, will likely prosper in the long run. That's my advice for the Democratic Party: get to the grassroots and start working.

Trying to compete, on the showmanship stage, with a guy who makes showman and politician P.T. Barnum look like an amateur, is definitely not going to be successful.