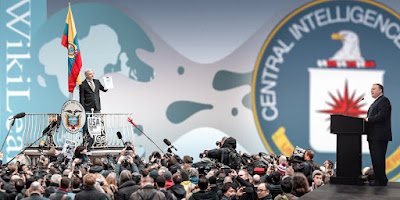 I consider Jeremy Scahill to be an extremely reliable reporter. He is the author of the international bestselling books Dirty Wars: The World Is a Battlefield and Blackwater: The Rise of the World’s Most Powerful Mercenary Army. He has reported from Afghanistan, Iraq, Somalia, Yemen, Nigeria, the former Yugoslavia, and elsewhere across the globe. Scahill has also served as the national security correspondent for The Nation and Democracy Now!

On April 19, 2017, posting in The Intercept, Scahill quoted CIA director Mike Pompeo. Pompeo has accused WikiLeaks of being a “hostile nonstate intelligence agency.” For Pompeo, this apparently means that WikiLeaks is "operating outside of the protections of the First Amendment." Click right here for Scahill's full article.

“We can no longer allow Assange and his colleagues the latitude to use free speech values against us," said Pompeo. "To give them the space to crush us with misappropriated secrets is a perversion of what our great Constitution stands for.” Scahill's article notes that Pompeo went on to add this ominous assertion: “It ends now.”

Pompeo's claim that the Constitution of the United States would permit the government to cut off free speech by government critics is a prima facie demonstration that Pompeo does not really understand what "our great Constitution stands for," to use his own words.

Since the head of the CIA doesn't understand our Constitutionally protected right to free speech, let's be sure that the rest of us do!