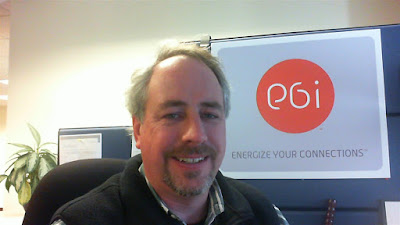 Brent Lewellen, pictured above, wrote a letter to the San Franciso Chronicle addressing the forcible removal of Dr. David Dao from United Airlines Flight 3411 on April 9, 2017. Lewellen's letter was published on Saturday, April 15, 2017, and is reproduced below.

The forcible removal of Dr. Dao from the airplane resulted in significant physical injuries to him, and the incident generated a great deal of public discussion (including several of my own postings on this blog, the latest of which was yesterday). Wikipedia now has a page devoted to the incident on United Flight 3411.

Listen to authority next time
I believe the most important aspect of the United Airlines story is being overlooked. It’s not about overbooked flights or whether airlines should have the right to compel passengers to give up their seats (currently they do).

The most important question this regrettable confrontation raises is what, as a society, we believe citizens should do when persons of authority, such as a security guard or a police officer, direct us to do something. Is it really OK now to simply disregard what a cop or security guard asks (then tells) us to do because we don’t want to?

You can reasonably argue whether United Airlines should have brought in airport security, but once it did, a citizen in a free society has a duty to comply with its instructions. You are certainly free to complain (loudly) as that authority figure escorts you from the plane; threaten to sue, demand to see a manager. But you must comply with those instructions, or you violate the social contract. One reason United called airport security is that people have decided they don’t have to listen to airplane personnel anymore. We can’t continue down this path.

It is Mr. Lewellen's contention that "a citizen in a free society" has a duty to "comply" with the instructions of a "security guard or a police officer" when such an official issues a direct order to the citizen to do something, and that this duty to "comply" applies without any reference, whatsoever, to how justified, or not, the order might be. In other words, it is Mr. Lewellen's belief that our duty as citizens is to "comply" first, and to complain later. This is how citizens must uphold "the social contract," according to the way Lewellen sees the world. This is, to repeat, what Mr. Lewellen contends is the obligation of "a citizen in a free society."

I want to disagree with Mr. Lewellen. Politely, I hope, but emphatically.

My first posting about this United Airlines incident noted how much the series of events that occurred on Flight 3411 duplicated what we know about how totalitarian societies operate, how they seize control, and how they transform what has been a "free society" into something quite the opposite.

Far from going along with what appears to be an abuse of official authority, I suggested nonviolent resistance, not only on the part of the passenger (Dr. Dao in this case), but also by everyone else, precisely so "citizens in a free society" could maintain that quality of freedom. If governmental authority has the right to act in apparently arbitrary ways, with the duty of the citizens being to "comply," no matter how arbitrary or legally unsupported the orders might be, then the chance to challenge the unjustified order at a subsequent time counts for very little.

If the security officers had told all the Jews on the plane to stand up, and get off, we know that this would have been wrong, but as Lewellen sees it, anyone subjected to this kind of an order, and anyone watching it happen, should simply "comply," and then take up their objections later, in a different forum.

My second posting about the United Airlines incident was about "adhesion contracts," and raised a legal question. Is it actually true that the airlines have a legal right to kick ticketed passengers off their planes, just because there is a 46-page contract that the passenger never read, but that the passenger supposedly agreed to? Lewellen thinks that these are the current rules. I am not quite so sure this is true. While I do think legislation to eliminate this possibility is appropriate,  as I argued in my blog posting, such an adhesion contract, in the circumstances in which Dr. Dao was kicked off Flight 3411, is quite possibly not a legally enforceable obligation to which he had a legal duty to "comply."

I would have no disagreement with Lewellen if he had said that he thinks that Dr. Dao made a very bad choice, in attempting to employ the tactics of passive resistance to oppose what the doctor thought was an improper order. In other words, had Lewellen been trying to give his personal advice about how it would be best to handle such a situation in the future - "comply" now, and take up the legalities later - he would have been making a responsible suggestion (thought I might politely disagree with that conclusion, too).

But Lewellen didn't say that he thought citizens should consider the "compliance and complain later" strategy as the best strategy to pursue, in cases like that in which Dr. Dao found himself. Lewellen said that it is the duty of citizens to "comply" with the orders of governmental officials (whether legal, justifiable, or not), and that this is what "citizens in a free society" are required to do.

I can't emphasize enough how much I disagree with Lewellen's approach to citizenship. It will be much better for all of us if every one of us refuses to "comply" with apparently arbitrary orders, and we need to refuse to comply at the time these orders are issued, not months or years later, in some completely different forum.

A "free society" can only remain free if governmental authorities are required to demonstrate their legal right to issue orders, and to carry them out, in advance of executing them, rather than demanding immediate "compliance" with what appear to be arbitrary demands, backed up by the potential and actual use of violence for those who don't "comply" with those demands immediately.

In my opinion, whether he really intended this or not, Lewellen comes down on the side of a totalitarian approach to government by saying that "compliance" is always the first duty of a "citizen in a free society."

In my view, the opposite is the case.