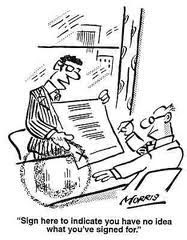 I teach a course at the University of California, Santa Cruz, in the Legal Studies Program. The course is called, "Privacy, Technology, And Freedom." During one class session we talk about "adhesion contracts." This topic is relevant to the course because persons who want to use social media sites, or to have access to various kinds of "applications," or otherwise to benefit from the advantages of new technologies, are almost always required to agree, by contract, to give up significant amounts of their personal privacy.

If the term "adhesion contract" is not familiar to you, the cartoon above gives you an idea of how an adhesion contract works. Wikipedia describes an adhesion contract as "a take-it-or-leave-it contract, where the terms and conditions of the contract are set by one of the parties, and the other party has little or no ability to negotiate more favorable terms and is thus placed in a "take it or leave it" position. There are lots of examples. We have all experienced them. If you'd like a scholarly evaluation, which outlines some legal ways to defeat these contracts in court, you can click right here, for a law review article that explores the legalities in depth.

A more popular discussion of adhesion contracts can be found in the April 13, 2017, edition of The Wall Street Journal. The article cited below is a followup to that United Airlines fiasco, in which Security Police dragged a ticketed passenger off a United Airlines airplane, relying on the passenger's agreement to be "bumped," when the airline needed to use a reserved seat for one of its own employees.

In terms of mechanisms for realizing our individual "freedom," contracts have traditionally been a powerful tool. When the parties can bargain on an equal footing, contracts allow individuals to create new realities by mutual agreement, in a way that benefits everyone. Contracts are great!

Contracts are great, that is, unless they are "take it or leave it" propositions, in which the parties to the contract do not have equal bargaining power. Then, the party with the stronger position can pretty much extract any condition that it wants. If you want to buy car insurance, or homeowner's insurance, or use Facebook, or do an Internet search, the companies with which you deal don't individually discuss what kind of provisions you want, or would find acceptable. These companies simply tell you how it's going to be.

Why bother to "read" an adhesion contract at all? I certainly don't. What's the point? If I am going to use Facebook, or a mapping program, or my new computer, I'm simply going to "agree" (I have to agree) to whatever provisions may be found in those contracts I never read. That's what we all do, pretty much. In court, you may have a way to defeat certain overbearing provisions to which you have agreed in an adhesion contract, though that is neither easy nor a sure thing. You can learn how that works from that law review article, "Challenging Adhesion Contracts in California: A Consumer's Guide."

The best way to deal with companies who want to put you in a "take it or leave it" situation, however, is not to approach them individually.

We are all individuals, of course, but we are more than individuals. We have "collective" powers. Those are powers that we exercise politically.

I have a hunch that the action of United Airlines, in dragging a properly-ticketed individual passenger off an airplane, may motivate a successful political effort to make sure that nothing like that will ever happen again. We are all Dr. Dao! Or we could be. The experience that Dr. Dao had will provide a good deal of motivation for airline passengers everywhere to demand that our representative government actually start representing us, not the corporations.

There do need to be "rules" governing passengers' (and the airlines') rights. Instead of letting the airlines draft their own, self-serving rules, and imposing those rules against individuals, by making all passengers sign individual, take it or leave it, adhesion contracts, let's do it a different way.

WE, the ordinary citizens (and potential passengers) can get together - through our representatives in government - and we can write the rules that WE think are fair. That's called "enacting a law." Once we have done that, then we can tell the airlines, it's either "take it or leave it." You can either follow the law (and run your business according to our democratically-enacted rules), or you won't be in the airline business anymore.

Maybe we ought to try it out every once and a while!