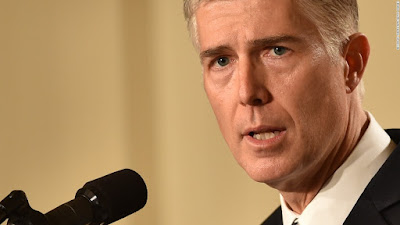 Pictured above is Neil M. Gorsuch. He is a Judge on the Tenth Circuit Court of Appeals, and there is a pretty good chance that he will soon be sitting on the United States Supreme Court.

If that's where Gorsuch ends up, what will become of Chevron deference? That may not be an issue upon which many people (including you) are focusing much attention, but it may turn out, in fact, that what happens with Chevron deference will have a major impact on the future of our democratic system. What Steven Davidoff Solomon calls an "arcane legal doctrine" may turn out to be very important, indeed.

By the way, "Chevron deference" does NOT mean that judges should always defer to the arguments made in court by the Chevron corporation. Click right here for a Wikipedia explanation.

If you'd like to read the actual case that gave "Chevron deference" its name, you can use the following link: Chevron U.S.A., Inc. v. Natural Resources Defense Council, Inc.

The Chevron case was decided by the United States Supreme Court in 1984, and according to Solomon, the decision has been cited more than 81,000 times since then. The case stands for the proposition that when an administrative agency interprets the law that governs its operations, the courts should "defer" to the agency's interpretation of the law, unless it is absolutely clear that the agency is wrong. If there is any question about what a law means, in other words, the agency that administers the law gets the right to interpret it, and the courts are not supposed to substitute their own judgment.

Solomon, mentioned a couple of times above, is a professor of law at the University of California, Berkeley. He suggests, in a New York Times article published on March 15, 2017, that the fate of Chevron deference may well be "crucial to the Trump Administration's plans to tame the regulatory state." Steven Bannon, remember, the President's "Chief Strategist," has recently said that he and the President are out to "deconstruct the administrative state." Whether they will be able to do that, and how that "deconstruction" might be effected, will very much depend on what happens with Chevron deference.

CNN has also decided that the Chevron deference issue is key, and has published the views of Professor Jeffrey Pojanowski. Pojanowski has been written up as an "expert" on the website of The Federalist Society. This is a rather right-wing think tank, and Pojanowski, presumably, is reflecting this right-wing perspective when he tells CNN that the Gorsuch nomination throws a "curveball" to the Trump Administration, because Gorsuch doesn't seem to be very much in favor of Chevron deference.

Here is how Pojanowski puts it:

Gorsuch's nomination comes with a curveball -- namely his skepticism of the longstanding doctrine that courts should defer to the executive branch's interpretations of law. Gorsuch has favored an approach to administrative law that would limit President Donald Trump's discretion and power.

Let me explain. Officials who answer to the president, such as the attorney general or the administrator of the Environmental Protection Agency, have to interpret law all the time. When agencies issue regulations or decide whether parties have violated federal regulatory law, they often must decide what federal statutes have to say on the matter. And when parties disagree with these agencies' decisions, they can challenge them in court.

A judicial doctrine known as Chevron deference, named after a 1984 Supreme Court case on the matter, governs how strictly a court should review an agency's interpretation of law ... If the court finds the statute unclear, it must defer to the agency's interpretation so long as it as a reasonable one -- even if that reading is not what the court would have adopted on its own ... As a practical matter, Chevron deference can shift substantial power to the executive branch, and therefore [to] the president.

Pojanowski lays it all right out there. If the President wants to be able to make the "law" be whatever he wakes up in the morning and decides it ought to be, then President Trump ought to want to preserve, not undermine, Chevron deference. As Pojanowski makes clear, Chevron deference can be used to negate the independence of the courts, so there is no "check and balance" coming from that quarter.

Think about the President's "Muslim Ban." If he had rolled it out right, making use of the doctrine of Chevron deference, he might have been able to have the Department of Immigration and Customs Enforcement "interpret" the existing law to make it say what the President wants it to say. Instead, we saw the courts actually check the president's assertion of arbitrary power.

Here's what I think is the main question: Does Steve Bannon (and/or the President) really want to "deconstruct," i.e., destroy, the "administrative state?" If that objective were a real one, Bannon and the president would not be friendly towards Professor Pojanowski's views, since the only way to prevent the kind of administrative arbitrariness that Bannon seems to be complaining about is to eliminate, or vastly restrict, Chevron deference. And maybe Judge Gorsuch is willing to go there.

Pojanowski appears to assume (along with most of the country) that Trump wants to be able to act unilaterally, and arbitrarily, with his power unchecked. Pojanowski proposes that the president should use the "administrative state" as a mechanism for arbitrary rule.

Is that where Bannon and/or the President really want to go? That doesn't sound like "deconstructing" the administrative state.

What happens to the doctrine of Chevron deference, after Judge Gorsuch gets to the Supreme Court, presuming that he does, may well provide some guidance on this question. If Chevron deference is reigned in, giving the courts more power to check arbitrary administrative actions, that could be good for our democracy, since such a check on arbitrary executive powers is what the Constitution demands.

On the other hand, if the Pojanowski principle comes out on top....

Well, that's what most Americans seem to be expecting from President Trump. No surprises there!