#48 / Who Profits From A Multi-Planet Civilization? 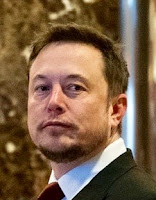 Pictured above, twice, is Elon Musk, the CEO of Tesla, Inc. Tesla builds motor cars. Musk is also the CEO of SolarCity, which fabricates photovoltaic panels, and SpaceX, which builds rockets.

Travis Kalanick, for instance, the CEO of Uber, announced that he would be leaving the President's Business Advisory Council in reaction to the President's anti-Muslim/anti-immigration Executive Order. Here is a memo Kalanick sent to his staff on February 2nd:

Earlier today I spoke briefly with the President about the immigration executive order and its issues for our community. I also let him know that I would not be able to participate on his economic council. Joining the group was not meant to be an endorsement of the President or his agenda but unfortunately it has been misinterpreted to be exactly that.

I spent a lot of time thinking about this and mapping it to our values. There are a couple that are particularly relevant:

Inside Out - The implicit assumption that Uber (or I) was somehow endorsing the Administration’s agenda has created a perception-reality gap between who people think we are, and who we actually are.

Just Change - We must believe that the actions we take ultimately move the ball forward. There are many ways we will continue to advocate for just change on immigration but staying on the council was going to get in the way of that. The executive order is hurting many people in communities all across America. Families are being separated, people are stranded overseas and there’s a growing fear the U.S. is no longer a place that welcomes immigrants.

Immigration and openness to refugees is an important part of our country’s success and quite honestly to Uber’s. I am incredibly proud to work directly with people like Thuan and Emil, both of whom were refugees who came here to build a better life for themselves. I know it has been a tough week for many of you and your families, as well as many thousands of drivers whose stories are heartfelt and heart-wrenching.

Please know, your questions and stories on Tuesday, along with what I heard from drivers, have kept me resilient and reminded me of one of our most essential cultural values, Be Yourself. We will fight for the rights of immigrants in our communities so that each of us can be who we are with optimism and hope for the future.

In a prompt follow-up to Kalanick's statement, Elon Musk tweeted that he would not be quitting. Musk says he doesn’t agree with all of Trump’s policies, but he really wants to help the president “make humanity a multi-planet civilization.”

Kalanick's communication to Uber employees focused on the impact of the Trump Executive Order on people located right here on Planet Earth. That actually seems like a pretty good priority. Musk is more concerned about some hypothetical "other planet" that could support human civilization, and I think there is a little problem there. Spending lots of money on trying to create a "multi-planet civilization," when civilization still has quite a ways to go right here, strikes me as a major distraction.

Heading for outer space, in other words, as part of a quest to create a "multi-planet civilization," is just a waste of talent and money.

However, I do think I know what's going on with Musk. I may be getting just a bit cynical, as I get older, but since we know he is in the rocket business, I think Musk is just looking for one more profit center.