#3 / That Letter From Putin 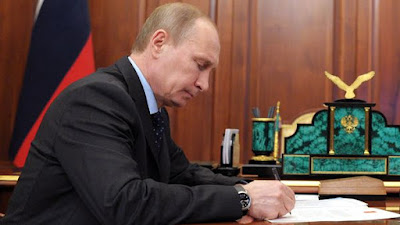 On December 23, 2016, I found a bulletin in my email inbox from The Hill, which provides news and information about the operations of the federal government. The article I found, when I clicked the link provided, was titled, "Trump shares letter from Putin: 'His thoughts are so correct.'"

December 23rd also happened to be the day that both President Putin and president-elect Trump made statements that could be interpreted as suggesting that the United States and Russia should return to the days of the nuclear arms race, when the U.S. and the U.S.S.R. each tried to develop, and deploy, more nuclear weapons than the other side. The Soviet Union's efforts to match the United States in this area is generally thought to have contributed in a major way to the ultimate failure of the U.S.S.R. as a superpower, with President Ronald Reagan trumpeting its collapse as the "end of the Evil Empire."

This "imperial" terminology is actually somewhat related to the point I'd like to make about President Putin's letter. I have reprinted it, in its entirety, below. As president-elect Trump said, it was a "very nice letter," basically calling for bilateral cooperation and collaboration.

While in some ways the letter is "nice" enough, I think it's pertinent to see how President Putin addressed his letter, a topic not mentioned, as far as I know, in the news coverage given to it. Salutations can be important!

President-elect Trump didn't choose to comment on the salutation used by President Putin, as he called the letter "very nice."

I, personally, think it's important that we let president-elect Trump know that he was addressed incorrectly, and that how the President of the United States is addressed is important (just so nobody gets confused about what role a president plays in our democracy).

I'd like to think that president-elect Trump would let President Putin know that future communications should conform to the practices that our democracy has determined are proper, with respect to how we address the President. Salutations are important, and the way we do it reflects the kind of role we expect our President to play. Things may be different in Russia, but that's not the model we follow.

At the time our nation was brought into existence, there was actually a very serious debate about the proper salutation to be used when addressing the President. The question was both debated and decided, long ago. "His Excellency" was rejected. The proper salutation is:


Mr. President.
(Saying "Your Excellency" is intolerable, and it's just plain wrong)

Unofficial Translation
HIS EXCELLENCY
DONALD TRUMP
PRESIDENT-ELECT OF
THE UNITED STATES OF AMERICA
Washington, DC
Moscow, Kremlin
December 15, 2016
Dear Mr. Trump,
Please accept my warmest Christmas and New Year greetings. Serious global and regional challenges, which our countries have to face in recent years, show that the relations between Russia and the U.S. remain an important factor in ensuring stability and security of the modern world. I hope that after you assume the position of the President of the United States of America we will be able -  by acting in a constructive and pragmatic manner – to take real steps to restore the framework of bilateral cooperation in different areas as well as bring our level of collaboration on the international scene to a qualitatively new level.
Please accept my sincere wishes to you and your family of sound health, happiness, wellbeing, success and all the best.
Sincerely,
V. Putin