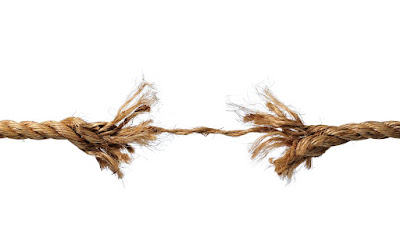 The picture above comes from a blog posting by Tomas Tonguz, who is a "Venture Capitalist at Redpoint." His blog posting is titled, "What I Learned From Complete Burnout At Work."

How to avoid burnout is a worthy topic, and Tonguz' posting is a compelling cautionary tale. However, I was attracted to the photo Tonguz used to illustrate his posting, not to the text of the posting itself.

The illustration reminds me not so much about my personal overcommitment to work responsibilities (which is, of course, always an issue), but more about how I see the state of our human civilization, with a particular emphasis on the state of democratic government in the United States of America.

"Fray" is the word that comes to mind when I look at that picture, and "fray" means to "unravel or become worn..." That's according to the Google Dictionary.

It also means "a battle or a fight," and I think that is what we have before us.

I like that expression, "get into the fray." If we don't get involved, ourselves, in the battle to reweave democratic government in the United States, and to patch up our worn out political system, it may be "game over" pretty quickly.