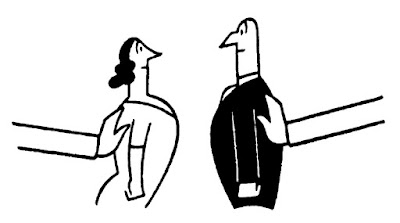 Unless you routinely read The New Yorker from cover to cover, obsessively, and with particular attention to those "Talk Of The Town" items at the front of the magazine, you have probably missed Daniel Smith's commentary, published under the following two headlines: "Brotherhood Of Man Dept." / "First Time Caller."

My advice is not to focus on that somewhat sexist first headline, printed in red. The content of the actual commentary is pretty exceptional, and because I think it's worth reading, I've reprinted Smith's commentary in its entirety (see below). You can also click this link to see Smith's commentary online. Online, the second headline reads: "A Friendship For A More Tolerant America."

Smith's commentary tells what I believe must certainly be a true story about how Heather McGhee (black) and Garry Civitello (white) became friends, based on Civitello's sincere effort to overcome his racial prejudices.

The Greeks called what Civitello has achieved "metanoia." In the theological use of the term, "metanoia" denotes a "spiritual conversion."


Maybe there could be an "app" that could facilitate the kind of expectation transformation that Civitello has been achieving, using what I think is a rather wonderful way of changing his own mind.

How about a multi-function "transformer app" (maybe something like Tinder, with a twist). The app could work in multiple situations, and in both directions:

You get the idea!


No "app" is really needed, of course. But how do we get people to do what Civitello has done? Unless we find an effective way for people to learn how to "change their minds," the debate and discussion, the dialogue and disagreement that comprise the very first stage of a healthy politics, will be aborted from the start.

In fact, isn't that exactly where we are now? I think it is, and if we're worried about totalitarian political solutions being imposed upon us (which lots of my friends are), the only way we can avoid that eventuality is by making real democracy work, and real democracy means that people must be able to change their minds, based on their real interactions with real people.

Smith's commentary suggests to me that we ought to be looking for a methodology for metanoia.

And we had better find such a methodology fast, too, before it's too late! App or not, Civitello's idea is worth pursuing:

A FRIENDSHIP FOR A MORE TOLERANT AMERICA

In late August, just as Donald Trump was making his improbable pitch to black voters (“What the hell do you have to lose?”), an unusual and tender video began to make the viral rounds. It showed Heather McGhee, the president of the progressive think tank Demos, responding to a caller on C-span’s “Washington Journal.” McGhee is black. The caller was white, and, he said, prejudiced against black people, because of things he’d seen in the news. But he didn’t want to be. “What can I do to change?” he asked plaintively. “You know, to be a better American?” McGhee, moved, offered some advice: get to know black people, read up on black history, stop watching the nightly news. Eight million people viewed the video, leaving comments like “Hear, hear, hear every sweet, nourishing drop of that!”

Not long ago, the caller, a fifty-eight-year-old disabled Navy veteran named Garry Civitello, flew to Washington, D.C., from his home in Fletcher, North Carolina, in the Blue Ridge Mountains, to spend a little time with McGhee.

Since their on-air exchange, McGhee has spoken frequently about “Garry from North Carolina,” presenting him as a counter-Trumpian symbol of decency, hope, and racial reconciliation. The two have developed, they say, a genuine relationship. Civitello joined Twitter to establish contact with McGhee. They have talked on the phone about a dozen times. Civitello describes his prejudices, and McGhee suggests ways to transcend them, talking to him, he says, “the way a doctor would talk to a patient.” They’ve covered personal matters, too: McGhee, who is thirty-six, got married last fall; Civitello lives alone with a parti-colored border collie named WoWo.

In Washington, they met for a drink at the Willard InterContinental hotel, a block from the White House. They sat on a red love seat, next to a busy staircase festooned with tinsel.

“I’ve been reading a lot,” Civitello said. He wore khaki pants and sneakers, and spoke with an easygoing drawl. Shortly after calling C-span, Civitello went to a used-book store. “So I go to the girl at the cash register—a little hippie girl in Asheville,” he said. “I’d found a couple of these black-studies books, and I go, ‘I’m practicing to not be prejudiced!’ And she’s on the register, like”—he softened his voice—“ ‘Well, that’s a good thing.’ ” He bought an 1843 account of the African slave trade; the autobiography of the civil-rights leader J. L. Chestnut, Jr.; “The Complete Idiot’s Guide to African American History”; and three books by Cornel West, whose work he now adores. A week before the election, McGhee visited Civitello in North Carolina and brought him two more books.

Civitello’s reading, he says, has transformed him. “My fears, my anxieties—those still linger. But I’m starting to see root causes. I was assuming people were being lazy. Or they didn’t care. They were being irresponsible in society. Now I’m finding out, no, they can’t get loans in banks—they have to use pawnshops. And I inherited a house!”

Civitello has employed a number of methods to realign his thinking. He avoids TV shows that focus on inner-city crime or traffic in minority stereotypes, like “The Real Housewives of Atlanta.” (“It doesn’t portray black women very well at all.”) He has begun taking iPhone photos of the many Confederate flags that fly near his home town. (“I wasn’t paying attention to it before.”) And he has a system to transform his social interactions. Using a scale of one to ten—one being awful, ten being great—he grades his expectation of how friendly a black person will be toward him. Then he grades the reality. His main laboratory is the V.A. hospital in Asheville.

“At first, I was giving people threes,” he said.

“These are your prejudgments of them,” McGhee said.

“Right. My prejudgments. Then I have a little conversation with them, like, ‘Wow, the traffic really got bad out this way,’ and they’ll say, ‘Yeah, it really did. How long you been living here?’ All of a sudden, I’m having a laugh with them, and I’m giving them eights and nines!”

“This was not a system I recommended,” McGhee said. “This is Garry’s invention.”

In the lobby above them, a group of carollers from a local girls’ school began to sing. McGhee mentioned that Martin Luther King, Jr., finished writing his “I Have a Dream” speech at the hotel.

“I read that,” Civitello said. “He finished it, then he walked over to the Lincoln Memorial. He could have sat somewhere around here, man. He could have come down these steps. Who knows? It’s really a privilege to be here. I thank you, Heather.”

They walked upstairs to listen to the singing.