#365 / There May Be Some Confusion Over There 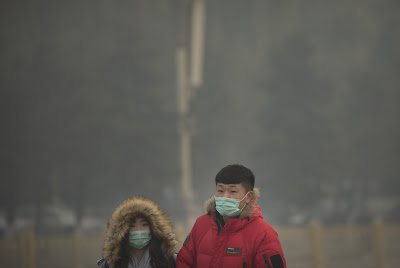 According to an article in the December 16, 2016 edition of The New York Times, Chinese officials in Beijing are calling smog a "natural" disaster. Another euphemism has also been deployed: "meteorological disaster."

The Times' article quotes The People's Daily, the official newspaper of the Communist Party, as warning that "serious consequences caused by mistakes in broadcasting about meteorological disasters will be punished." In other words, the government is saying that if anyone claims that smog is the government's fault, or that the government should be responsible for eliminating it, they're going to go to jail (or maybe even worse).

The air pollution caused by the burning of hydrocarbon fuels, however, is not "natural," but human-caused. Trying to suggest that important aspects of reality are not really subject to human modification flies in the face of the truth that we all live, most immediately, in a "human world," and in that world, the conditions that exist are the product of human decision and action.

I usually harp on the opposite mistake, the failure to note what while we live, most immediately, in a human world, a world which we can shape as we will, we ultimately reside in the World of Nature, and the governing rules of that World of Nature are beyond our human powers to alter. The Laws of Nature are unchangeable truths. The rules and laws that we promulgate to govern the human world can be altered by human choice and action.

BOTH kinds of errors can lead to disaster! One disaster is to refuse to understand that bad things, like smog and poverty, are caused by human choice, and can be eliminated by different decisions and actions. The opposite error, which I speak about most frequently in this blog, is the idea that humans can decide to do whatever they want, without any consequences, as though the laws of Nature did not apply.

The "natural" conditions of inversion layers and air circulation in and around Beijing, or anywhere else, for that matter, are governed by a meteorology that is "natural," and that we can't directly change. But the laws that govern the Natural World simply provide the framework within which humans act. Those laws frame the arena in which we create the reality we will most immediately inhabit.

My "Two Worlds Hypothesis" insists that while we can't change that Natural frame, we have latitude to change anything that we do within that frame.

I believe it's likely that the Chinese public officials who say that smog is a "natural" disaster know better, and know that while meteorology may be unchangeable, the effects produced within the meteorological framework depend on what we do.

If I am wrong about that, and the Chinese officials are at all sincere, and think that smog really is a "natural" disaster, then I want to let them know they need to pay attention to that "Two Worlds" differentiation.

If they are sincere, there seems to be some serious confusion over there!