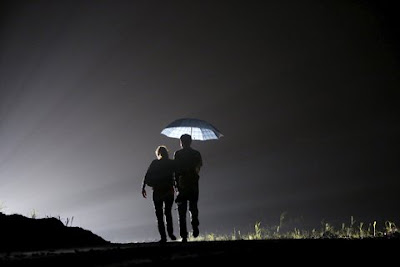 On December 15th, last year, The New York Times published an essay by Roy Scranton that ran under the title I have reproduced above: "We're Doomed. Now What?"

I recommend Scranton's essay, which is actually an elaboration of an earlier Scranton essay, "Learning How to Die in the Anthropocene." That essay was published by The Times on November 10, 2013. You can see the essence of Scranton's thinking from the following excerpt:

We face the imminent collapse of the agricultural, shipping and energy networks upon which the global economy depends, a large-scale die-off in the biosphere that’s already well on its way, and our own possible extinction. If homo sapiens (or some genetically modified variant) survives the next millenniums, it will be survival in a world unrecognizably different from the one we have inhabited...

But the biggest problems the Anthropocene poses are precisely those that have always been at the root of humanistic and philosophical questioning: “What does it mean to be human?” and “What does it mean to live?” In the epoch of the Anthropocene, the question of individual mortality — “What does my life mean in the face of death?” — is universalized and framed in scales that boggle the imagination. What does human existence mean against 100,000 years of climate change? What does one life mean in the face of species death or the collapse of global civilization? How do we make meaningful choices in the shadow of our inevitable end?

These questions have no logical or empirical answers. They are philosophical problems par excellence. Many thinkers, including Cicero, Montaigne, [and] Karl Jaspers ... have argued that studying philosophy is learning how to die. If that’s true, then we have entered humanity’s most philosophical age — for this is precisely the problem of the Anthropocene. The rub is that now we have to learn how to die not as individuals, but as a civilization.

Scranton served in Iraq, and he says that his experience in that war zone has helped prepare him, spiritually and intellectually, for "learning how to die."

His practice in Iraq, says Scranton, was to start each day by recourse to "an 18th-century Samurai manual, Yamamoto Tsunetomo’s 'Hagakure,' which commanded: 'Meditation on inevitable death should be performed daily.'”

Scranton reminded himself, each morning, that he "didn’t need to worry, because I was already dead." The only thing that mattered was that I did my best to make sure everyone else came back alive. “If by setting one’s heart right every morning and evening, one is able to live as though his body were already dead,” wrote Tsunetomo, “he gains freedom in the Way.”

Since Christmas is almost upon us, I can't help remarking at how specifically "Christian" this technique is. While the lesson within the Christian canon is most often associated with Easter, rather than Christmas, it is the Christian's firm conviction that he or she has already "died with Christ," and then has been reborn into a new life, and that this "death" is what provides the power truly to live.

This approach to life, in which one counts himself or herself as "already dead," is exactly what Scranton is recommending for our civilization. His lesson is not so much that we need to learn "how to die" in the Anthropocene (as though we are looking to the future for that death). It is, quite the opposite, that we realize, even as we live, that we have died already:

The biggest problem we face is a philosophical one: understanding that this civilization is already dead. The sooner we confront this problem, and the sooner we realize there’s nothing we can do to save ourselves, the sooner we can get down to the hard work of adapting, with mortal humility, to our new reality.

The choice is a clear one. We can continue acting as if tomorrow will be just like yesterday, growing less and less prepared for each new disaster as it comes, and more and more desperately invested in a life we can’t sustain. Or we can learn to see each day as the death of what came before, freeing ourselves to deal with whatever problems the present offers without attachment or fear.