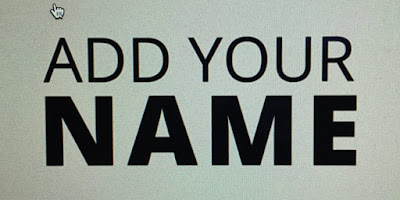 During the first week of December this year, I was solicited to sign a petition sponsored by Demand Progress, addressed to the Attorney General of the State of Michigan.

You can read more about Demand Progress by clicking right here.

The Demand Progress petition was addressed to Michigan State Attorney General Bill Schuette, a Republican who was then suing Michigan State Elections Director Chris Thomas, to prevent Thomas from carrying out a recount of the votes cast in the 2016 presidential election. The introduction to the petition read as follows:

Americans have a right to complete confidence in the integrity of the electoral process, and to ensure every vote is counted. Please immediately drop your emergency motion to stop the recount of votes in Michigan and allow it to go forward without further interference.

This particular petition to Attorney General Schuette was similar in form to many petitions that I find in my email inbox, in that it asked me to transmit my views to some public official who does not, in even the remotest way, represent me, or care about what I think.

Schuette is a Republican Attorney General in the State of Michigan, elected by voters in Michigan, and his duty is to those voters. A petition from Michigan voters should have an impact on Schuette, if our democratic system is working as advertised. I am a Democrat from the State of California, and I  can't vote for or against Schuette. Schuette does not represent me, since I am not from Michigan. Why should Schuette care about what I think?

Short answer: He doesn't. And if I signed the petition, and he didn't do what I asked, I couldn't do anything about that, either.

Thus, although I do agree with the above quoted statement from the petition to Schuette, I decided, some time ago, to decline to "petition" public officials who bear no official responsibility to me.

Petitioning an elected official for whom you can vote is a way to exercise your political power, because any such petition carries an implicit political threat. But when you petition an official who has no reason to listen to you, in terms of his or her own official responsibilities (and who won't, in fact, listen to you, because there is nothing that you can actually do to them if they disregard your request), there is no credible threat involved, and thus no power in the petition. The petition is just a way to make yourself feel good.

That's what I have concluded, at any rate, and that these petitions are just another way to make ourselves think that we can "click" ourselves to a healthy politics, and to good political outcomes. Let's not fool ourselves, or let ourselves off the hook so easily.

There is another reason I am resistant to signing petitions addressed to officials from other states, who have no political responsibility to me.

I am becoming more and more concerned that the federal system that defines democracy in the United States is being lost, as we "nationalize" every issue, and as we act as though every citizen should be concerned about political decision making in every other state in the union. I am routinely, for instance, asked for political contributions for Democrats running for Congress, or even for the state legislature, in other states. I want Democrats in other states to win, but what I really want is for the people in each state to elect Democrats, because the people in that state have concluded that the Democratic candidates are the candidates who will best represent them. There is a good argument that the Democratic Party's reliance on operating at the "national" level distracted the Party from the hard job of persuading local voters, in some of the so-called "red states," from voting for and electing Democrats. As we have just seen from the most recent presidential election, the results of this "national" approach has some flaws!

Taking over political power on a "national" basis, as Donald Trump has just done, has led many to begin predicting a totalitarian takeover of our politics. Hannah Arendt, who knew a lot about totalitarianism, liked the American system because it set up so many competing centers of political power, and specifically in the states, thus making it very difficult to overcome them all and to impose a centralized and totalitarian control.

We need to strengthen our local (and particularly state level) politics, to avoid the potential of a totalitarian politics at the national level, the kind of politics that can flourish more easily when the only power is "national" power.

Make no mistake, politics is about power. And voters actually do have power, but they have to use it. Our system is set up so that we can use our power most effectively by focusing our voting power at our Congressional representatives, and at state and local officials.

Let's not get distracted by the illusion that "adding our name" to statements that don't have any real political power behind them is what politics is all about. It's not. It's about electing officials who must respond to us, because they know that we're watching them, and that if they don't respond to what the majority wants, the majority will throw them out.

Politics is about forcing our representatives to do what we want. It's not particularly "nice." "Petitioning," if it's genuine, must be based on an implicit threat: if you don't do what we ask, we are going to do something to you!

When I "add my name" to a petition addressing someone for whom I can vote, then adding my name will have that threatening effect, even if only in a small way. That's not true if I am petitioning someone who has no electoral responsibility to me.

Maybe we shouldn't be adding our names to a petition when there is no real way that we can do anything about it, if the official being petitioned doesn't do what we ask.