#319 / Rejecting The Case Against Democracy 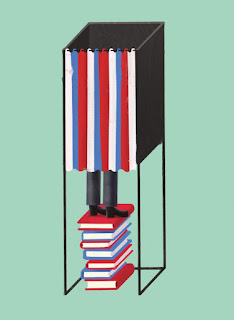 The November 7, 2016 edition of The New Yorker carried two articles that were particularly timely for those contemplating the elections held around the country on November 8th.

One of the articles was titled, "None of the Above: The Case Against Democracy." The second article was titled, "The Enemy Next Door."

The titles found in the online versions are slightly different from the titles used in the print edition, which are the titles I have provided here. These slight discrepancies aside, the links above will get you to the right place to read the articles.


Joshua Rothman's report, in "The Enemy Next Door," was pretty hopeful. He discussed a recent election in the small Long Island town where he lives, a very "hot" election that pitted "development" candidates against "anti-development" candidates. As Rothman told the story, the pitch of political "hatred" that appeared in the political contest pretty much disappeared when the election was over (he didn't say which side won). Life returned to "normal," and "normal" meant that the common life of the "community," the life of neighbors meeting neighbors, as they went about their daily lives, overcame the heated political disputes of the election just past.

Wouldn't it be nice for the United States of America if things turned out that way for us, as a nation, now that our presidential election is over?

It could be that this is what will happen (it's probably too early to say), but that kind of follow on from an election does depend, as Rothman notes, on a recognition that elections are exercises in political decision-making, and that this is a specialized activity that is different from our normal community life together.

"The Case Against Democracy" is essentially a book review, in which Caleb Crain reviews a new book, Against Democracy, authored by Jason Brennan. Brennan's book argues for "epistocracy," as opposed to "democracy." Epistocracy is "knowledge-based rule."

I think Crain's review is worth reading. Acknowledging the problems that democracy does have, he ends up by coming down on the side of a government based on the "consent of the governed," i.e., democracy, as opposed to a government based on a transfer of effective power to those who are (allegedly) better educated and intellectually superior, and thus better equipped to make all those hard decisions.

The presidential election just past has been enough to make all of us uneasy about the possibility that "democracy" means a kind of "mob rule," a government that will be hateful, ruthless, and "deplorable," to use a Hillary Clinton descriptor. But here is Crain, who I think is on the right side:

Like many people I know, I’ve spent recent months staying up late, reading polls in terror. The flawed and faulty nature of democracy has become a vivid companion. But is democracy really failing, or is it just trying to say something?

I think that the election just past is one in which the citizens of the United States, from all sides, are trying to "say something." But just what are they trying to say?

And that means ALL of the people, by the way, not just white people.

The government that we will insist upon, that we have always insisted upon, isn't the kind of government our modern state has been providing. That "for the people" part has been particularly and conspicuously absent in recent times, as the incredibly productive economy and society in which we all play a part has directed virtually all of the economic rewards from our social and economic success to the upper 1% of the population.

To use a phrase from former President George W. Bush, "that will not stand."

Our political engagement is needed to redirect a government gone painfully and perilously astray. That's the "something" that our democracy has been "trying to say" in this past election season.