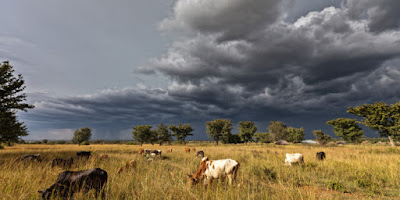 On September 13, 2015, a little over a year ago, The Huffington Post published an article by Jedediah Purdy, who is a professor at Duke Law School. Purdy's article, which has only recently come to my attention, was titled, "Climate Apocalypse And/Or Democracy." Among other things, Purdy had this to say:

In the last week, a group of scientists and a prominent historian each predicted a climate apocalypse. The scientists, led by Ricarda Winkelmann of Germany’s Potsdam University, issued a paper finding that, if humans burn the rest of the world’s estimated fossil fuel reserves — which might take only another 140 years at current rates of increase — effectively all of the world’s ice will melt, and sea levels will rise some 160 feet, enough to change the surface of the planet and drown, among others, New York, London, Shanghai, Buenos Aires, Tokyo, and all of Bangladesh.

Historian Timothy Snyder of Yale argued in the New York Times that climate change may bring us the next Hitler. If we ignore the warnings of science and don’t start investing in clean technologies, climate shocks will push countries into panic-inducing scarcity, inspiring everything from ethnic and religious conflict in Africa and the Middle East to imperial land grabs by a hungry and worried China. The Nazi precedent is at the heart of Snyder’s essay, which is titled “The Next Genocide.” For him, Hitler’s genocidal war for “lebensraum,” or “living space” for Germans, is a paradigm of an anti-scientific response to an ecological crisis. Snyder emphasizes that Hitler rejected scientific measures to increase crop yields and called for Germans to colonize Ukraine and the rest of Europe’s grain belt as protection against a food-poor future.

Taken together, these two warnings underscore the discomforting fact that the future of the planet is a political problem.

I have no quarrel with Purdy's claim that we are facing a climate-related "apocalypse." I think he is right about that. I do take exception, though, to Purdy's statement that "the future of the planet is a political problem."

Listen to what Julia Roberts says, portraying "Mother Nature" in the "Nature Is Speaking" series, presented by Conservation International:

The "political" problem we face is the future of our world, the human world, the world that human beings create, and that is most often called "civilization."

Our human world depends on the World of Nature, and the future of the human world is, indeed, a political problem. We live in a "political world."

If we don't promptly come to understand our radical dependence on the Natural World, and forge our politics accordingly, it is the future of the human world that will be extinguished.

Even the most casual reference to the World of Nature as a realm dependent on us (rather than the opposite, which is the actual truth) can distract us from our real situation. That kind of misunderstanding can mislead us...

Listen to the voices of the World of Nature in the "Nature is Speaking" series: